Strategic cooperation has been signed by BYD and Budweiser China, that deploy 30 BYD Q3 heavy-duty electric trucks in 2021.

Budweiser China will take the lead by purchasing BYD Q3 heavy-duty electric trucks according to the agreement, and will deploy these trucks in its breweries in Foshan, Tangshan, Wuhan, and other cities separately.

BYD Q3 was designed by international car designer Mr. Wolfgang Egger, which is equipped with the world’s leading lithium iron phosphate batteries and integrated powertrain technology developed completely in-house by BYD. The Q3 also boasts a revamped motor drive system and integration of the whole-vehicle control technology, achieved a range of more than 200 kilometers on a single charge.

As a world-leading beer brewing company, AB Inbev’s (Anheuser-Busch InBev) business covers 50 countries and regions around the world, which enjoys wide popularity in the Chinese market. 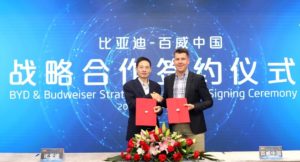 As a global leader in new energy vehicles, BYD began to research and developed pure electric trucks in 2012 and became the world’s first company to invest in the R&D of new energy trucks.

BYD pure electric trucks are currently operating in overseas markets including the Budweiser Distribution Center in Southern California; Amazon’s headquarters, Amazon Park; Port of Los Angeles, Port of Oakland, Port of San Diego, and more, as well as operating in many Chinese ports in Ningbo, Xiamen, Huai’an, Yantian, and so on.

New energy technology company BYD has joined visiting British Prime Minister Theresa May in Beijing for the establishment of a major trade initiative between China and UK, and become the only new energy vehicle company […]