Microlino AG comunicated the has been completed the third prototype and the development is in the last phase, starting the preparation for production.

The third prototype is featuring with the complete new interior and also has been finished the folding roof, that has been mounted in a third chassis and body toolings. 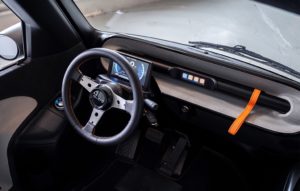 Together with their partner CECOMP have been established a new company, Microlino Italia which will be responsible for production in Turin.

The third prototype is already very close to the series version in terms of the exterior and interior design. It features the redesigned interior with dual displays, one behind the steering wheel as a speedometer and a smaller touch display integrated in the central bar to control functions like the heating etc. The central touch display gives more flexibility to add additional features and uses less space, compared to conventional buttons.

Another new feature is the reengineered folding roof, developed by Magna Car Top Systems, which is an expert in the field of convertible tops and roof systems. The new folding roof can easily be opened and closed with one hand while driving and lets in a gentle breeze. 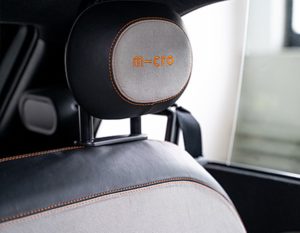 The folding roof will be available as an option and comes standard in the premium versions.

Like on the new Ford Mustang Mach-E, Microlino AG has eliminated the front door handle completely to simplify the design even more. To open the door, you need to unlock the car with the key and press a small button below the headlight. This will pop-up the door just enough for you to grab the door to fully open it seamlessly.

To open the door from the inside, there is another button located at the back of the aluminum handlebar, which activates the door mechanism. 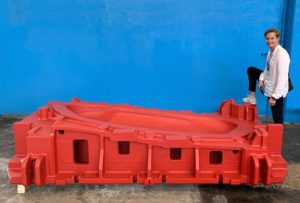 A few weeks ago, Microlino AG started with the industrialization of the Microlino 2.0. This includes all the tools and fixtures for the series production, as well as planning the assembly steps for production. For the chassis and body, over a third of the tools are finished.

Here you can see a picture of the stamping tool for the side panel, which is one the biggest part made out of aluminum. All together this stamping tool weighs around 12 tons or 24 Microlinos!

Together with the partner CECOMP, they have established a new company, Microlino Italia which will be responsible for production. At the beginning of the Microlino project they never wanted to be manufacturer, but they realized that this is the only way to control the quality and at the same time reduce the cost of production.

The assembly line will be located at the premises of CECOMP in La Loggia, Turin.

Good news from Microlino AG, the Swiss Company that created the Microlino, that announced to close legal dispute out of court and start the production on 2021. […]