Serving local roads on its route from Milton to Glasgow city centre, the zero-emission buses will improve air quality for residents, including children at St Joseph’s Primary School, who were the first passengers on the inaugural journey to a launch event attended by Nicola Sturgeon, First Minister of Scotland, and Anna Richardson, City Convener for Sustainability & Carbon Reduction at Glasgow City Council.

The introduction of the zero-emission electric buses was made possible by the award of £1.5 million in funding from SP Energy Networks’ Green Economy Fund, established by the electricity network operator to support

the Scottish Government’s ambitious green targets to boost local economic growth, improve air quality in Scottish cities and to expedite a better future for all.

The 10.8-metre buses were built by Alexander Dennis in Scotland on chassis supplied by BYD from its factory in Komárom, Hungary, providing 36 comfortable seats in a spacious interior. Batteries will be charged overnight at First Glasgow’s Caledonia depot, where the operator has installed 22 charging points in anticipation of further investment in electric buses. 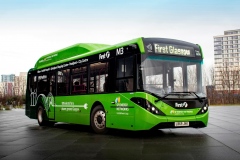 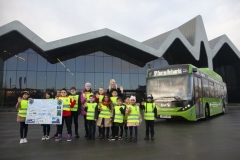 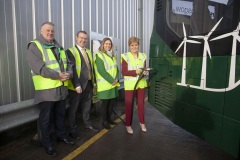