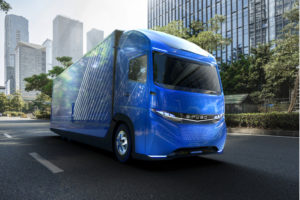 The E-Fuso Vision One, although a concept, could be in production within the next four years, according to its maker. Don’t scoff. Fuso already has an electric truck in production.

The brand in September unveiled the eCanter light-duty truck whose first customer was delivery firm UPS. The eCanter is suited to short routes because its battery only provides about 62 miles on a charge.

The E-Fuso Vision One is a heavy-duty truck promising a range of 217 miles and a payload similar to a conventional diesel truck. Making this possible is a massive battery array with 300 kilowatt-hours of capacity.

Fuso says the electrification of long-haul trucks will still need considerable time due to insufficient battery technology, so the brand sees something like the E-Fuso Vision One being used to transport goods between regional cities until more range is possible. 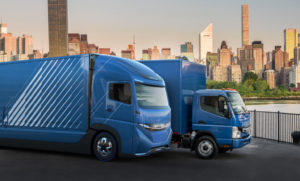 Fuso’s long-term goal is to electrify its entire lineup. This initiative will be backed by access to parent company Daimler’s know-how in the fields of battery and charging technology, Fuso says.

“In the future, all our electrified vehicles will run under the name of E-Fuso, our new product brand dedicated exclusively to electric trucks and buses,” Fuso CEO Marc Llistosella said in a statement.

Daimler and its truck brands are not alone in the race to electrify heavy-duty transport. Tesla promises its own heavy-duty electric truck, though has pushed back the reveal on two occasions already. General Motors, Cummins and American startup Nikola have also unveiled electric truck concepts in the recent past.

Performance Team – a Maersk Company, a warehousing and distribution company, has placed an order for 16 Volvo VNR Electric Class 8 trucks. […]