Odyssey 21, the Extreme E electric SUV, has been invited to the Dakar Rally 2020 and will be drive by Guerlain Chicherit, that have ten years of experience at the Dakar Rally.

Chicherit will drive the E-SUV during shakedown for the legendary endurance event, and will then be on display on the New Energy stand at the Jeddah Dakar Village between 2-4 January. The car will also open the Qiddyah Grand Prix on 17 January – the final 20 kilometre special stage that wraps up the incredible Dakar Rally – alongside the entire field of competitors and a selection of electric and hybrid cars, motorbikes and trucks.

Chicherit’s combination of FIA World Cup for Cross-Country Rallies experience – a series which he won back in 2009 – and ten years competing at the Dakar Rally will serve him well when he belts up inside the ODYSSEY 21, and he can hardly wait.

I’ve always maintained my love for the Dakar Rally. To this day, Dakar has given me some of the best memories, challenges and taught me many lessons, and I am pleased to see the organisers shining a spotlight on alternative energy mobility this year by inviting the ODYSSEY 21 E-SUV and a number of other electric and hybrid vehicles to be part of the 2020 Dakar – said Chicherit.

Combining my love for innovation, adventure and the edgy unknown makes this the perfect opportunity with Extreme E and the Dakar Rally. I can’t wait to experience first-hand the development in technology when I get behind the wheel of the ODYSSEY 21 E-SUV and launch this electric solution at what is seen as one of the toughest long-distance races in the world.

The Frenchman currently lines up in the FIA World Rallycross Championship, and has done since creating and entering his own team, GC KOMPETITION, into the flagship rallycross series back in 2018. Prior to campaigning in World RX, the Frenchman was a four-time Freeskiing World Champion, and FIA Junior World Rally Championship entrant.

Chicherit has been focussing on electric mobility and developing EV projects over the last couple of years while launching his mobile energy solutions company, GCK Energy, with great success and he sees Extreme E’s drive for innovation and sustainable evolution as a fascinating prospect.

I’ve invested a lot into sustainable technology and solutions these past few years and Extreme E has decided to challenge what has previously been done in electric motorsport and to push the limits of technology to inspire the future, which really aligns with me and my projects, – added Chicherit. I haven’t actually driven the ODYSSEY 21 yet, so doing so for the first time as part of the preparations for  the 2020 Dakar was an opportunity I couldn’t miss out on. 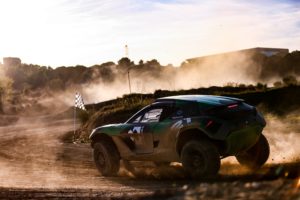 The Extreme E E-SUV’s public unveiling came at Goodwood’s Festival of Speed on 5 July 2019, with Spark Racing Technology – the constructors of Formula E’s Gen 1 and Gen 2 machines – completing the initial build of the prototype just a week earlier.

An intense testing schedule has followed that initial display run, with Official Tyre Partner Continental Tyres putting the car and its bespoke rubber through their paces with a comprehensive week-long test programme in the south of France at the Château de Lastours proving ground – a site regularly chosen by Dakar and FIA World Rally Championship entrants aiming to put their machinery through the ringer.

As well as making its appearance at the 2020 Dakar, the E-SUV will be put through a full testing programme in Saudi Arabia, getting to traverse a range of landscapes and surfaces, from sand dunes to canyons and mountain ranges in what will be a crucial research and development process as the engineers at Spark continue to prepare the car with just over a year to go before Extreme E’s inaugural round, starting January 2021. 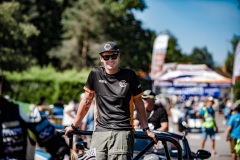 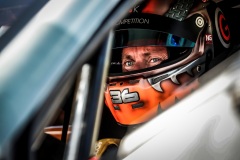 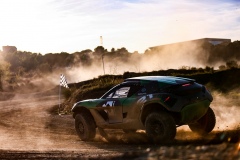