Eric Granado was the quickest rider of the MotoE opening test session at Jerez de la Frontera, ahead of Dominique Aegerter by only thirty thousandths of a second.

The quickest rider of the MotoE signed a 1’47.553s lap-time in the morning session of the final day, riding his Energica Ego Corsa #77 at ‘Circuito de Jerez Angel Nieto’ in Andalucía, Spain. 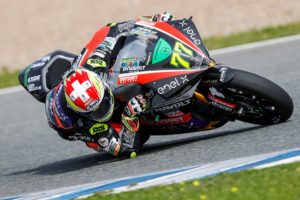 Strong winds and changeable skies – but luckily no rain – did not prevent riders from getting up to speed after the long winter, or in some cases, from getting to grips with Energica’s stunning race machine. Speaking of newcomers, one surely made an impression: 15-year-old rookie Fermin Aldeguer (OpenBank Aspar Team) was storming the undulating Jerez track already on day one while getting in the mix with much more experienced riders, both at world championship level and in MotoE. The young Spanish rider ended up fourth-fastest, behind 2019 title winner Matteo Ferrari (Indonesian E-Racing Gresini MotoE) and ahead of the reigning World Cup champion Jordi Torres (Pons Racing 40).

Energica and the FIM Enel MotoE World Cup will return to Jerez next month for three more days of testing (12-14 April), with the season opener scheduled at the same track on May 2nd.

Kuberg Motorcycles project team has begun turning their Kuberg Ranger prototype into the final product, a kind bike, for a one of a kind riding experience. […]