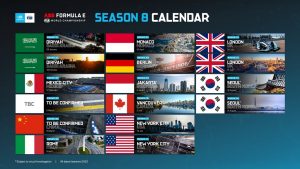 Formula E races can now have additional race time of up to a maximum of 10 minutes added when incidents result in a Safety Car or Full Course Yellow neutralisations during the standard 45-minute + 1 Lap race. As ratified at July’s WMSC, Formula E’s all-electric Gen2 cars will be able to use 220kW of power in Season 8, an increase from 200kW in Season 7, during the 45 minute + 1 Lap races. Power allowed during Attack Mode will also increase to 250kW from 235kW in Season 7. 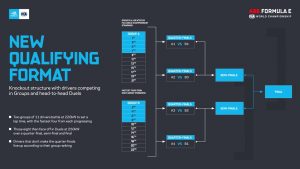 Also validated today, a new qualifying format featuring Groups and head-to-head knockout Duels will be introduced allowing the best teams and drivers to showcase their speed and skill. The format maintains the possibility of any driver to start on pole, ensuring drama and unpredictability throughout.

Qualifying will feature a first round of two groups with each driver able to make multiple attempts at fastest laps within their allocated time. The top four fastest-lap drivers in each group will progress into head-to-head Duels on a knockout basis in quarter-finals and semi-finals. Pole-position will be decided in a final head-to-head Duel, with all grid positions based on either success in the head-to-head Duels, or lap times depending on which stage of Qualifying drivers reach.

The changes being made to qualifying and race time reflect our and the FIA’s focus on sporting integrity and maximising the racing spectacle. Our new qualifying format will showcase the teams and drivers head-to-head throughout the season while still allowing any driver on their day to take pole position. For our fans, the new qualifying format was designed to be intuitive, unpredictable, and entertaining.

The ability to increase race time when we have incidents during the regular 45-minute race is a product of the rapid evolution of electric vehicle technology and the continual improvements in energy efficiency by ABB Formula E teams.

With more races in more global iconic cities than ever before the season ahead is set to be our largest to date as we rebound from the impacts of Covid-19 over the last two seasons.

Combined, the revised calendar and new regulations will mean that Season 8 of the ABB FIA Formula E World Championship is expected to be the best yet for our teams, drivers and fans.

To secure an even more authentic and intuitive sporting format, both our sporting and technical teams at the FIA have put a lot of efforts together, in collaboration with Formula E, to first propose an attractive and disruptive new qualifying session. It has been designed to remove the impact of track evolution during the Groups whilst simplifying the understanding for the fans and optimizing the show with the Duels.

Additionally, the effective racing time will also be improved with an innovative additional time system and ensure the battle goes on until the checkered flag. With all those new challenges for teams and drivers, I’m sure the competition will once again be super tight in Season 8 and I’m really looking forward to it!