Swiss and rookie rider Dominique Aegerter won the Saturday MotoE race at Misano and extends his championship leadership after a dramatic race.

The opening race for the FIM Enel MotoE World Cup at the Misano World Circuit was a nail-biter and only decided right at the chequered flag. 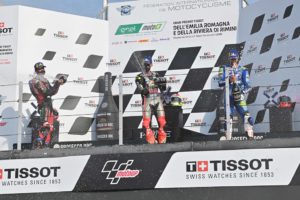 The experienced Swiss rider started the last lap in third place but did not hesitate in putting together a clean overtaking manoeuvre on poleman Jordi Torres (Pons Racing 40), which allowed the-then leader Matteo Ferrari (Team Trentino Gresini MotoE) to build a small gap at the front. Aegerter was not ready to leave it there, though, and as soon as the riders exited the ‘Tramonto’ corner on the way to the super-quick ‘Curvone’, he was already all over the back of the reigning world cup champion. Another clean pass at the ‘Carro’ gave him the lead, but a not so perfect run into the last turn allowed Ferrari to get side by side, with the #77 rider just managing to maintain a half-wheel advantage at the finish line – with Torres close behind the duo.

Ferrari, however, was later penalised one position as he exceeded track limits on the exit of the final turn and was therefore third in the final results behind the former WorldSBK race winner. With his second win of the season, Aegerter extends his lead to 19 on Torres, with Ferrari now third and 21 points away from the top. 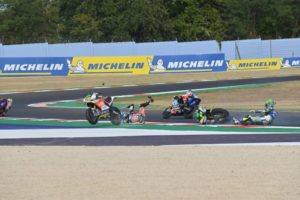 This race had its fair share of drama and surprises. Lukas Tulovic (Tech 3 E-Team) had a massive highside on the opening lap. Lukas’ guardian angel did a great job today. Although he suffered a broken third metacarpal bone in his right hand and has some pain in his right ankle in what looked a horrendous incident, he is keen to ride in the 2nd event at Misano. But tomorrow morning the doctors will decide if he can indeed take part.

Xavier Simeon (LCR E-Team) was on the receiving end of a collision triggered by Eric Granado (Avintia Esponsorama Racing) who was trying to overtake the Belgian rider for fourth place. Alex De Angelis (OCTO Pramac MotoE) also crashed out of the encounter while he was running within the top six while another potential protagonist of the race, Mike Di Meglio, ended up in the gravel at turn 16. Niki Tuuli (Avant Ajo Motorsport) received a double long-lap penalty for a jump start and was the last rider to cross the finish line in today’s race.

As mentioned yesterday, the starting grid for tomorrow’s second and final encounter for the Emilia Romagna GP will be based on today’s race results: Aegerter will be on pole, with Torres and Ferrari completing the front row. The action will begin at 10:05 local time (GMT +2).