From January 1st, 2022, Rimac Group is fully operational as an umbrella company that includes Bugatti Rimac and Rimac Technology business.

The Rimac Group is the majority shareholder in Bugatti Rimac with a 55% stake and Porsche owning the remaining 45%. Rimac Technology – the sister company to the previously known Rimac Automobili – is set to become a completely independent company, 100% owned by Rimac Group. It will continue and expand its activities in the engineering, development, production, and supply of high-performance battery systems, electric drive units, electronic systems, and user interface components that Rimac is known for, having established a reputation as a leading provider of advanced performance electrification technologies. 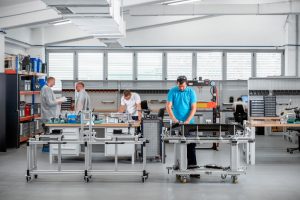 Actually Rimac Technology works with many major automotive manufacturers across Europe, using its engineering expertise in developing the Nevera from the ground up to offer a range of products that takes their customers through the entire product creation process – from concept to large-scale production. Rimac Technology is publicly known to have worked with many global OEMs including Porsche, Hyundai, Kia, Automobili Pininfarina, Koenigsegg, Aston Martin, while there are many additional projects which are still unknown to the public. Having delivered components for several niche volume projects in the past years, Rimac Technology is ramping up its production capacity and will be manufacturing tens of thousands of high-performance systems per year by 2024 and further ramping up to volumes of hundreds of thousands with products ranging from small hybrid battery systems to full rolling chassis.

Rimac Technology is free from any oversight by any other manufacturer, including investors into the Rimac Group business. It’s just as important for Rimac Technology clients that their projects are kept confidential, as that it is delivered with the required cost, performance and on time.

Rimac Technology today is a 1,000-people company based on the outskirts of Zagreb, Croatia. From 2023, The Rimac Group, including Rimac Technology, will be headquartered at a new 200,000 m2 Rimac Campus on the outskirts of Zagreb in Croatia. Large enough to accommodate over 2,500 people, the Campus incorporates every aspect of The Rimac Group business, including production of the Nevera next-generation all-electric hypercar and high-volume production of components for other OEMs.