Solar and wind energy are essential power sources of the energy transition for moving away from fossil fuel, this is the vision of Mobilize.

Every second of every day, we use energy. To move, to communicate, to heat… Around the world, such use of energy is still heavily dependent on fossil fuels. According to the International Energy Agency (IEA), coal, gas, and oil still account for 80% of global energy production. But, unlike solar or wind, these fossil fuels are limited resources. The shift away from them and over to renewable energy is a process involving a number of challenges. First and foremost, they present a major flaw: intermittency. That is where stationary storage comes into play.

Demand for energy, in particular electricity, varies throughout the year and also of the course of a day. Periods of high demand, such as 7.30pm, are currently covered by output from thermal power plants or through imported electricity. Storage technology is designed to stock surplus energy output that is later fed back into the grid later during peak demand, without having to resort other options that are CO₂ intensive. 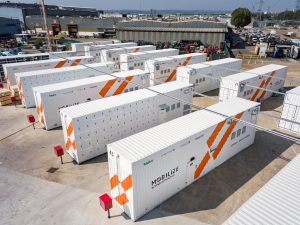 Storage is an essential factor of the renewable energy equation. In fact, while solar power is abundant and easy to tap into via photovoltaic panels, and wind power is growing steadily, their biggest drawback is their intermittent output. In other words, wind turbines and solar panels are great when there is wind or the sun is shining, but what do you do when there isn’t even the slightest breeze, there are clouds in the sky, or at night?

Storage is used to compensate for such fluctuations, it is like a fuel tank that fills up fills up during peak production and empties out when demand is high. It is called ‘stationary storage’ when it involves fixed batteries, unlike mobile storage, such as computer or car batteries. Mobilize is tackling the issue head on with its ‘Advanced Battery Storage’ stationary storage devices that have already been rolled at several sites in France and Europe.

In addition to providing a sustainable solution for renewable energies, stationary storage is also a viable reusing option for the types of batteries found in electric cars. When a battery is no longer fit for use in a vehicle, and before being recycled, it can be given a ‘second life’ in electricity storage, which is a less rigorous and demanding task in terms of energy density and power.

EV batteries can have a second life

A battery is much more than just a tool used in mobility. Once its life being useful in a vehicle has come to an end, it still has considerable residual value and can be used for other purposes that are less demanding being used in a car, such as stationary storage. We see it as the next logical step.

The Advanced Battery Storage is Europe’s largest stationary electricity storage device ever built from electric vehicle batteries. The batteries are stacked into containers (30 to 60 batteries per container) which are then joined up and plugged into the grid. Each container represents a capacity of 1 MWh (megawatt hour), which is roughly as much energy as an average French household uses in three months. While the system uses second-life batteries, there are also some additional unused batteries that are eased in to their ‘career’ before being used in electric vehicles such as the Renault ZOE.

Challenges to be overcome, but there is potential

High storage capacity, increased range, small space: these are some of the challenges faced by this new technology. Rome wasn’t built in a day!  Bear in mind that the first lead-acid battery dates back to 1859 and the advent of Li-ion technology and the first unit sold was only in 1991! 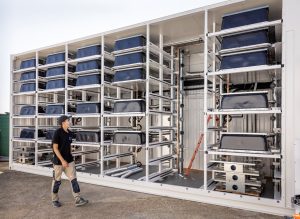 However, technology is advancing at a much faster pace is now showing great potential: ultimately, the storage capacity of Advanced Battery Storage will reach 70 MWh. That is close to the daily energy use of town with 5,000 homes!

With the fight against global warming calling for more renewable energy, stationary storage – and therefore electric vehicle batteries – is proving its worth as a major asset in helping champion the energy transition.

In France, as required by current legislation on the Energy Transition for green growth, renewable energies will have to account for 40% of electricity generation by 2030.

A quick trip around the world*, gives a quick understanding that some of our neighbours are already doing well.

Iceland, for example, took the path of renewables a long time ago. It is the world’s leading country in terms of green energy production per capita, with renewables covering 100% of the country’s energy use.

Costa Rica has produced nearly 100% of its electricity from renewable sources since May 2019. The country achieved such an ambitious goal through hydro, solar, wind, and geothermal energy – made possible thanks to roughly sixty volcanoes

In Norway, renewable energy accounted for nearly 70% of total electricity consumption by the end of 2015. In 2020, the share in the mix reached 95%, mainly due to a large use of hydro power. This is one of the best levels in Europe.