The eight 12-metre eBuses that BYD has recently delivered to the Coimbra Municipal Transportation Service (SMTUC) in Portugal, marking the first time that BYD has entered the Portuguese bus market.

By 2050 – he said – we will have all ground mobility driven by electricity or hydrogen. 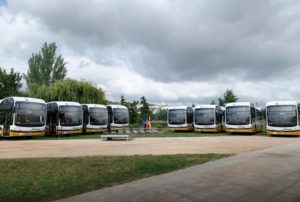 The eBuses – added Mr Matos Fernandes – are, therefore, a part of the response that the Municipality of Coimbra is giving to the new urban consciousness, to the new civic and environmental demands of the citizens who live and work here.

We are delighted to have planted a BYD flag in Portugal’s bus market – it’s a very important country for the future of electric mobility with a number of Portuguese cities expressing progressive views on clean, 100% emissions-free transport. Local Authorities across Portugal will be keeping a close eye on Coimbra and the many benefits – social and financial – which it can expect over the coming months and years.

“Today, – he said – BYD is present throughout Europe, and in hugely diverse markets covering the full spectrum of climatic conditions; from extreme cold in Scandinavia to the heat of southern Italy, Spain and now Portugal. BYD eBuses deliver reliable, safe operation – whatever the weather! 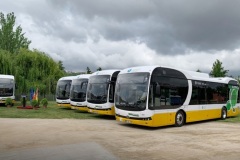 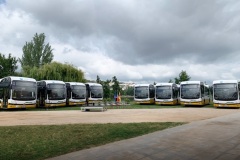 Volvo Buses and ZEBRA to deploy e-buses in Latin America

Turin and Novara, Italy. 23 new BYD e-buses on the streets

BYD has been delivered three 12m e-buses to the Municipality of Novara. The new e-buses can be used during a full day operations without necessity to charge their batteries. The new electric buses were presented […]