Featuring a cutting-edge British-built electric powertrain designed and developed at Equipmake’s purpose-built facility in Norfolk, with the body produced by Beulas in Girona, Spain, Jewel E is a cost-effective and highly efficient electric double decker bus that will help to reduce local emissions in urban environments, improve air quality and reduce running costs for operators – no matter what the city, from London to Las Vegas *.

Set to be manufactured in 2022 at an all-new facility in Norfolk, Jewel E will not only bring new jobs to the area but play a key role in helping UK Government achieve its target of introducing at least 4,000 more British-built zero emission buses into the UK market by 2024, through its Bus Back Better** national strategy. 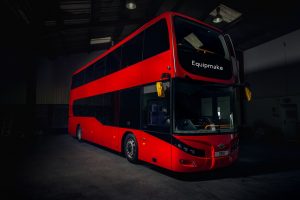 Under the skin lies Equipmake’s advanced propulsion technology – Zero Emission Drivetrain (ZED) – which is modular and scale-able, capable of supporting different bus sizes. ZED is already being used in single decker form on the streets of Buenos Aires, Argentina as part of an Equipmake partnership with Agrale.

Packaged according to specific applications to optimise space for battery/kWh, ZED now underpins Jewel E – the next step in Equipmake’s strategic plan to grow its line-up of advanced electric powertrains and vehicles.

Integrated into the Jewel E chassis ZED is the company’s HTM 3500 motor, which combines high torque with low motor speeds, and is fitted directly onto the propshaft negating the need for a separate gearbox.

Producing maximum torque of 3,500Nm at just 1,000rpm and offering maximum power of 400kW, it is driven by a Semikron SKAI inverter with energy stored in a variety of customer-specified lithium-ion battery pack options of up to 543kWh, the largest battery of any single axle double decker electric bus in the world, giving a maximum range of up to 250 miles, enabling more than enough daily operating mileage.

Jewel E efficiency is made possible by one of the most efficient thermal management systems on the market, which keeps the motor, inverter and battery at optimum operating temperature, featuring a water-glycol cooling circuit augmented by the capture of thermal energy to heat the interior in cold conditions. When the battery is depleted it can be simply recharged at the depot overnight using a CSS DC charging point. 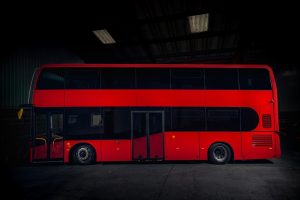 In London alone, buses on the capital city’s streets cover over 475 million kilometres*** a year, keeping people mobile and connected, forming an integral part of the transport network. Specifically developed for demanding daily usage cycles, Jewel E is the first EV bus to meet the latest Transport for London (TfL) bus safety standard specifications and requirements for 2024, including enhanced safety features to give the public, drivers and passengers piece of mind. It is suitable for operation in both London and the surrounding UK provinces.

Equipmake has worked with Spanish coachbuilder Beulas, which has manufactured the Jewel E double decker body. Testing of Jewel E begins in Q4 2021 with in-service trials expected to take place in Q1 2022. Manufacture and sales of Jewel E will begin in 2022.

Nobina, the principal bus operator in Sweden and the Nordic region, has been ordered further 13 eBuses from BYD to add in the fleet for far-north operation. […]

BYD and ADL partnership to supply e-bus for Greater Manchester

Partnership ADL and BYD supplied 32 BYD ADL Enviro400EV to Stagecoach Manchester at the start of the year, with investment in the £16.5 million. […]