There are two worlds in Formula E, simulator and racetrack and BMW i Andretti Motorsport chief engineer, Valentino Conti explains how to build a success.

Intensive preparation for each race weekend takes place in the BMW Motorsport simulator in Munich.

Almost all the BMW i Andretti Motorsport engineers attend the simulator sessions ahead of race weekends. where the schedule of the one-day format allows little time for test work and no room for error. That makes the virtual preparations in the BMW Motorsport simulator particularly important.

Ahead of each race weekend, the majority of the BMW i Andretti Motorsport team assembles in Munich (GER), where they create a solid basis for subsequent performance at the racetrack. As chief engineer, Valentino Conti (GER) coordinates both race and simulator operations. The current break in racing offers the opportunity for him to explain the process behind the simulator work, the goals of this work, and why it is essential for success in Formula E.

Before the start of the current enforced break, it was the same ritual before every Formula E race weekend with engineers and drivers from the BMW i Andretti Motorsport team preparing together in the simulator for the pending event. Only this way is it possible to deal professionally with the unique challenges posed by the Formula E regulations – challenges that will hopefully be posed again soon when Season 6 is able to resume. With practice sessions, qualifying and the race on the same day, the teams have barely any time remaining for test and development work. All that has to be done in advance.

If we did not have the tests in the simulator beforehand, we would be lacking a lot of performance – said Conti, who has held the role of chief engineer since the start of the current season. Any knowledge you don’t acquire in the simulator is very difficult to catch up on at the circuit.

As a rule, the BMW i Andretti Motorsport engineers’ intensive preparations begin with planning meetings and a functional test for the software, which supplies the simulator with the respective circuit and car data. Nearly all the engineers and the two drivers, Maximilian Günther (GER) and Alexander Sims (GBR), meet in the week leading up to the race. Anyone unable to be there can join the sessions online.

95 percent of the engineers are usually involved in the preparations, plus a few people who are responsible for the operational process in the simulator – said Conti, who went on to explain his philosophy. I like to have as many people as possible at the simulator tests, whether it be engineers or drivers. In my opinion, that is imperative. The whole team arrives at the racetrack with a totally different basis when it comes to knowledge and experience. It is very difficult to convey this knowledge on site to someone who was not there during the preparations.

As well as the actual simulator, which recreates the actual cockpit of the BMW iFE.20 right down to the smallest detail to make it as close to reality as possible for the drivers, the simulator’s moving platform and a screen, there is also a special control room. In this room, the engineers use the same communications and computer programmes as they do at the racetrack. This allows the drivers and the entire team to train as precisely as possible for the real thing. Conti places great importance on team spirit:

We work as one unit. Only that way can we be efficient.

With that in mind, it goes without saying that the Andretti engineers are in close communication with their colleagues, either on site in Munich or online.

The itinerary for the test sessions are based on a plan, which is determined in advance. It starts with a comparison of data gathered at the previous race. That is followed by many short runs, the aim of which is to try out different set-ups and configurations of the BMW i drivetrain. Race simulations and energy management tests are also integral components. Conti and his team also play out various scenarios to be prepared for unpredictable events that may occur on a race weekend – for example, safety car periods and race interruptions.

Even with all this meticulousness attention, how exactly is it actually possible to prepare for reality in the simulator?

We have a high rate of success – said Conti. We have even had situations where we have been able to implement the energy management strategy we developed in the simulator on a 1:1 basis in the race.

However, Conti, who has been involved in Formula E since Season 4 and whose previous success includes winning the DTM title in 2012 as Bruno Spengler’s (CAN) race engineer, is also keen to play down this success.

That success rate obviously fluctuates. There are always certain surprises at the circuit. However, thanks to being well prepared, we are generally able to react to them very quickly.

The track walk, on which the drivers and engineers walk the circuit on the day before the respective Formula E race, plays a very important role in being able to check for any differences to the version they had driven in the simulator. Has the radius of a corner changed? Can you cut the kerbs or are they possibly too high? What exactly do the pit lane entry and the activation zone for ATTACK MODE look like? All of these details are compared before the BMW iFE.20 takes to the track for the first time in the shakedown, usually on the Friday afternoon.

The shakedown is really nothing more than a functional test, but we also use it to compare the grip conditions to those that we had simulated in advance – explained Conti. We then discuss whether we may need to change things, before we prepare our plans A, B and C for the race day to be able to react as flexibly as possible. It is one thing after another on the Saturday and there is no time for any major discussions.

How good a job was done in the simulator is revealed by the first practice session on the morning of the race day, if not beforehand in the shakedown. Any major issues encountered make life difficult.

On the odd occasion, even we can get the set-up wrong – said Conti. You can catch up, but it is difficult: the competition, who may arrive better prepared, are improving all the time, which means you must improve faster than they do.

The chief engineer quoted the opening round of Season 6, in Ad Diriyah (KSA) last November, as a positive example of this kind of fightback.

We were surprised by the extremely low grip levels there, which we had not predicted in the simulation. However, we are able to react to that quickly and claimed two pole positions and victory in the Saturday race.

It remains uncertain when the BMW i Andretti Motorsport team will return to the real racetrack after the current break. When that time does come, however, Conti and his team-mates want to be ready. To ensure that is the case, they are regularly in the simulator to run through their processes – whilst observing all safety measures, of course – “just to stay in training,” said Conti. 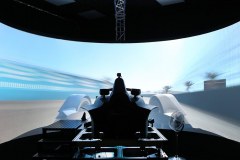 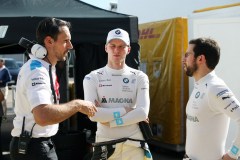 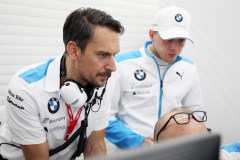