At the end of the opening two free practice sessions of FIM Enel MotoE World Cup in Misano, Granado and Ferrari were fastest, with Aegerterter not far behind.

Both main favourites for this year’s title, Eric Granado (Avintia Esponsorama Racing) and Matteo Ferrari (Team Trentino Gresini MotoE) were separated by only 32 thousandths of a second, with the Brazilian topping the timesheets ahead of the reigning world cup champion with a lap-time of 1m 43s990sec. 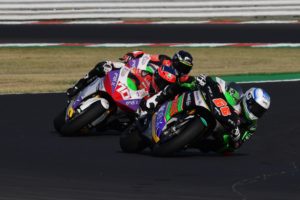 Both riders are laser focused on the win in this doubleheader at Misano after the big setback last time out at Jerez.

Third place went to the Sammarinese Alex De Angelis (OCTO Pramac MotoE), who was able to stay in the top three after leading the way in the morning’s opening session. Current series leader Dominique Aegerter did not take too long to find his way around the well-known Misano World Circuit ‘Marco Simoncelli’ aboard his Energica machine as he immediately settle into a good rhythm; he will now turn his attention to bridge the gap in terms of lap-time with the leading duo.

Little more than eight tenths of a second comprised these eleven riders, which is a good sign ahead of the third free practice of the weekend, taking place tomorrow morning from 11:50 local time (GMT +2).