More dramatic than ever has been the final race of the 2021 FIM Enel MotoE World Cup at Misano World Circuit, with the winner of the title decided during the parc fermé.

This was due to a last-lap coming together between the two title contenders Jordi Torres (Pons Racing 40) and Dominique Aegerter (Dynavolt IntactGP), with the latter trying an aggressive overtaking manoeuvre on the inside at the ‘Carro’ corner, which led to the former crashing out of the race.

Aegerter then crossed the line first, a result which technically would have given him the title, but the aforementioned move ended up being sanctioned by race direction, with the Swiss rider being demoted to 12th. This classification change resulted in Torres successfully defending the title won last year: no harsh feelings between the two riders, just incredible racing.

The race itself was again a spectacular one, with Torres pulling away from the early stages thanks to an extremely quick pace and clear track ahead. After having the better of Mattia Casadei (Ongetta Sic58 Squadracorse), Aegerter went on a mission to bridge the gap with the Spanish opponent, and was able to do so courtesy of a series of incredibly quick lap-times (including the new best lap of the circuit aboard an Energica Ego Corsa in 1’42.660. He eventually caught the leader, but there was no one else behind him who was close enough to join the battle – as a win for him with Torres in second still would not have been enough for him to win the title. 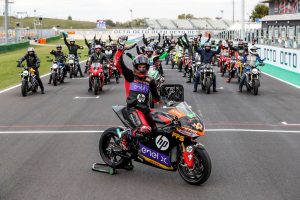 In this whirlwind of events, Ferrari was not only able to claim his fifth MotoE race win out of seven MotoE races at Misano, but also moved up to third place overall – a result the Rimini-born rider had targeted entering the final round.

After the race, the 2021 FIM Enel MotoE World Cup posed for pictures with his bike on the finish straight, with 30 Energica customers – from all over Europe – aboard their motorcycles joining him for a spectacular celebration lap around the track – to wrap up the first edition of the Energica Week.

After setting no fewer than 11 new records in November 2020, the Voxan Wattman and Max Biaggi are gearing up to conquer new world speed records. […]

At the end of the Moto E practice day at Jerez to the Andalucia GP, four riders were in just 0.104secs and the fastest has been rookie Swiss Dominique Aegerter. […]