Designed to be used for the next three seasons, the Gen2 Formula E car will make its competitive debut in the 2018/19 season of the series. With almost double the energy storage capacity and double the range of the current car, the Gen2 will enable the teams to complete a full race at higher speeds, without making a mid-race car swap. 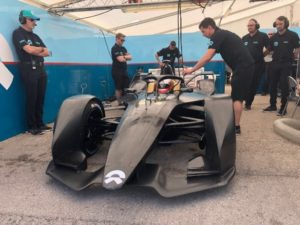 British driver of the #16 NIO Formula E Team NIO 003 car, Oliver Turvey, was behind the wheel of the futuristic new challenger for all driving duties this week.

Firstly, it was an honour and proud moment for me to be the first driver to turn a wheel in the NIO Formula E Team’s new Gen2 Formula E car this week in Calafat. As it was the first run of our new car, we ran through a number of installation and systems checks gathering data for the team.

My first impressions of the car are very positive; it looks fantastic and is a clear step forward in terms of performance. But now the real works starts.

It was great to be back at Calafat, the team’s chosen test circuit, and this week has witnessed another milestone in the history of the NIO Formula E Team with the first running of the NIO squad’s Season 5 challenger. Over the two days of track running we have completed extensive chassis and powertrain systems checks with the NIO 004 development chassis and I am happy to say that both the car and the newly formed NIO Test Team has functioned well.

We are now looking forward to commencing our proper Manufacturer Testing Programme with the NIO 004 development chassis in the coming months.

The official Mercedes statement about entry into Formula E

Mercedes‑Benz commits to Formula E, departs DTM Formula E entry for Season 6 in 2019/20 DTM departure at the end of the 2018 season Toto Wolff: „Our years in the DTM will always be held […]