In the interview, the Audi Sport ABT Schaeffler team principal Allan McNish talks about the most important challenges in the Formula E fifth season.

In his first season as Audi team principal in Formula E, Allan McNish (48) experienced a rollercoaster of emotions and a happy ending with the 2017/2018 teams’ title. In this interview the three-time Le Mans winner talks about his darkest moments, best decisions, his thoughts on the future of Formula E and why it is a luxury to have two aggressive drivers like Daniel Abt and Lucas di Grassi in the team.

The first Formula E season with you being the team principal was a thriller until the very last lap. Has your heart rate come down a little bit since then?

I went on holiday with my family straight after the season finale in New York. Ahead of that weekend I didn’t know whether it would be a happy beginning of the holiday or a rather frustrating one. After the results we achieved, luckily it became a kind of celebration holiday. It was important to get away and switch off. Since I came back, New York has already been out of my mind and there is full focus on Riyadh and season five.

Champion of Formula E – how does that sound to you?

Sounds pretty cool, doesn’t it? It is great what we have achieved. But for me it is much more crucial how we had to achieve it: It wasn’t by design – that’s for sure if you look at the start of the season, but it was by a fantastic fight-back from both of our drivers and the entire team. This is something I will for sure never forget.

Twelve points after four races into the season – what were you thinking at that time?

I remember walking out of the paddock in Santiago after another race with zero points. Daniel got hit on the first lap and Lucas had to stop with an inverter problem. It looked as if all of the potential that we had seen in pre-season testing was just slipping away and so was the championship. At that moment, I would have never ever thought that we would keep the championship fight open until the last race, never mind win the title at the last gasp.

What do you think is the biggest challenge being a team principal in Formula E?

Coming into this position in Audi’s first year in Formula E was definitely a learning process. And it started off with the big challenge of keeping everybody in the team focused when we experienced tough times like we did in Marrakesh or Santiago. I’ve been in motorsport for quite a while and I know that sometimes you can try whatever you want and things just go wrong. But there is always a switchover point and we had to make sure that everyone kept their eyes on the goal. The team and the drivers were nothing but exceptional in the second half of the season. They definitely made my life a lot easier then.

Can you name a best decision in your new role?

Well, the best personal decision I made was to take the role because I am really enjoying it. One of the best decisions we made as a team was to confirm and give Daniel the opportunity to prove his performance as an Audi factory driver. He grew up a lot, he showed the speed he had before but he also showed the experience that he had gained. I am pleased that we were able to give him a good technical package and support in terms of engineering. I am sure he will build up on that confidence and make another step next year. The two race wins to his credit are just the beginning and there is much more to come.

And what would you write into the school report of Lucas di Grassi after this season?

Being on the podium seven times in a row once we got rid of the technical problems clearly shows his level of performance, consistency and determination. The year probably started off in the worst way possible for Lucas and our team and ended with more podiums in one season than any other team in the history in Formula E achieved. And I think we all agree that the competition was really tough with a lot of great drivers and excellent teams out there. And once again he stood out as one of the best. Whoever took the big trophies for drivers’ and teams’ titles in New York thoroughly deserved it.

How do you moderate the situation that Daniel is chasing the much more experienced Lucas?

For me the way to look at it is very simple: We need to have two fast, aggressive, hard-charging drivers and we need to have cars that deliver them race wins. If we do have that, we have the chance of taking

some titles. If we don’t, we don’t. And then sometimes we might have the occasion that the two guys are at the front at the same time and unfortunately in motorsport only one can win. I much prefer to have a situation like this than not to be competitive at all. From my perspective, it’s a luxury to have two drivers and a team that are so passionate to win. Daniel stepped up very well and probably a little more than Lucas expected. Now they are pushing each other and that is exactly what we want and need.

How do you rate Formula E – considering it is still kind of a start-up?

I was not an instant believer that the championship would flourish to the same level it has. Mainly because I have seen a lot of championships come and go in their first couple of years. Formula E has been able to get that momentum much more than I, plus 95 percent of the motorsport community expected. Now, Formula E has to ensure that it stays clear with its DNA – and that is city street racing, taking the racing to the fans, close and hard competition, focus and the efficiency of electric drivetrains. At the same time, the series needs to evolve with the technology that is available and make sure that it stays the exciting Formula E that we have today. I don’t think Formula E should compete with Formula 1. It should make its own road and follow it.

What do you expect from the future now with more big players like BMW, Mercedes and Porsche joining?

It’s not that the competition is low at the moment, but I think it will get much more intense. Right now, you have quite a consistent grid in Formula E and you can roughly work out which circuit is going to be strong for which team. When the other manufacturers step in we might have a bigger fluctuation through the course of the season with guys at the front in one race and at the back in the next one. I can only see it strengthening the competitive element of the series. It will be harder to get a consistent season together for everyone which is great news for the fans and a tough story for the teams. But that makes victories even sweeter.

Season 5 starts in the middle of December. What is your schedule in terms of preparations?

Our new Audi e-tron FE05 has been running since the first group test with the other manufacturers in March. Since then, we have done a couple of private tests with Lucas and Daniel. From our perspective, we know where we are relative to ourselves and relative to what our goals were – which is following in line. However, the good and the bad thing is that we don’t know where anybody else is. So, it will be exciting to see all the teams at the only official Formula E test in Valencia in the middle of October. I believe that the new car is a big step forward – visually as everyone can see, but also in terms of battery, performance or regeneration. Daniel and Lucas enjoy driving it a little bit more than the generation one car.

The all-new Audi e-tron is just about to get on the road. How do you like it?

At Audi, motorsport has always been a leader prior to the technology coming to the road. That was the same with all our racing programs in the past. e-tron technology has been succesful on track at Le Mans with us since 2012, is now in Formula E and will be on the road for the customers later this year. This again shows the way we at Audi are developing road cars through pushing the boundaries in racing. Personally, I have already put my name down for an Audi e-tron and I hope I will get it as soon as possible. 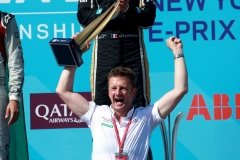 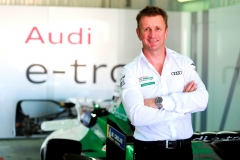 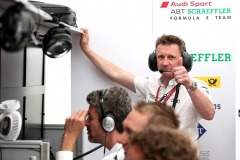 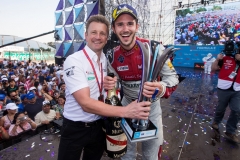 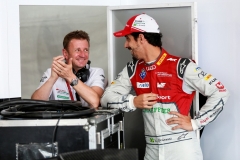 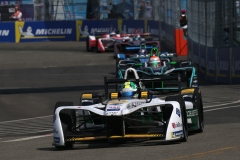 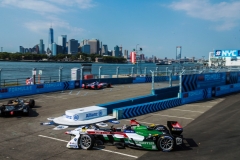 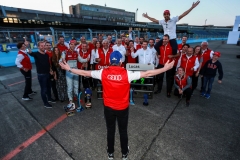 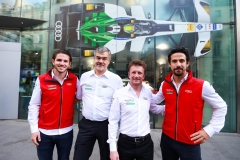 Porsche LMP1 Team Principal Andreas Seidl reveals they are open to possible satellite team for the season before it officially enters the FIA Formula E Championship in 2019… by John Dagys Photo: Porsche October 14, […]