29 november 2017, Stuttgart/Melbourne.  Turning off to the right from the left-hand lane, flashing speed limit traffic signs, kangaroos jumping over the road: road traffic in Australia presents some very special challenges. Automated and autonomous vehicles have to be aware of these peculiarities. 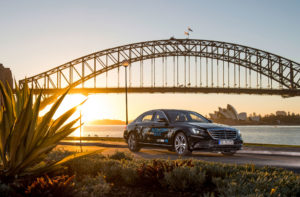 In the third leg of the Mercedes-Benz Intelligent World Drive, the test vehicle – based on the S-Class series-production saloon – is facing up to Australia’s unique conditions and situations with automated test drives on highways, motorways and in the city of Melbourne. Mercedes-Benz started the Intelligent World Drive at the Frankfurt International Motor Show (IAA) in September to adapt more highly automated driving functions to national traffic and user practices.

The aim is to gather global insights into real-life traffic conditions for the advancement of the technologies. As part of this, up until January 2018 the test vehicle is collecting comprehensive information in a variety of complex traffic situations on five continents
and in doing so is sounding out the limitations of the current systems.

The focus of the test drives in Australia, taking place from Sydney via Canberra and Albury to Melbourne and its urban traffic, is on validating the digital map data from HERE, detecting traffic signs specific to the country and testing out the innovative DIGITAL LIGHT system. 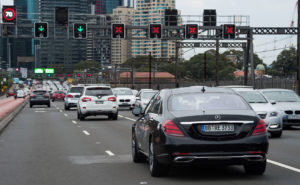 Instead of the classic speed limit signs made of metal, Australia’s road traffic system is making increasing use of electronic displays with variable speed limits which are designed to improve both traffic flow and safety. They are fitted with a bright white LED display, a red LED ring and a yellow LED warning lamp and are able to display not only speed limits but also simple symbols and letters. In some cases they are positioned one after another, to ensure dynamic traffic flow, and can change what they display within fractions of a second. These signs present a major challenge for the performance of the digital camera and the quality of the digital mapping data, which enable automated driving functions such as Active Speed Limit Assist and Active Distance Assist DISTRONIC to function reliably.

A further peculiarity is the traffic situation referred to as a “hook turn”, which across the globe is only to be found in Melbourne. It controls turning off from roads which are also used by trams within Melbourne’s CBD. Anyone wanting to turn off to the right across the tram lines must get into the left-hand lane. The sensor system of an automated and autonomous vehicle must be able to detect the hook turn sign and interpret it correctly so that the system can also provide assistance in such situations in the future.

Also unusual when compared with European or American road traffic is the extremely high number of animals crossing the road, particularly in the sparsely-populated regional areas. Just as high is the number of accidents involving emus, koalas, wombats or kangaroos. Automated driving functions could help to minimise the risk of such collisions, or avoid them as far as possible. For this, sensors such as cameras and radar systems must detect the animals in good time and calculate their exact distance. Admittedly kangaroos represent a particular challenge when it comes to the further development of the sensor system, as they do not run across the road but jump, and are able to reach a height of up to 1.5 metres and a speed of 60 kilometres per hour. In addition, there is the question of how the vehicle should react when it detects animals.

The test vehicle based on the S-Class is fitted with a headlamp prototype featuring the innovative DIGITAL LIGHT technology. This revolutionary lighting system makes functions possible that were unveiled as a vision of the future in the F 015 Luxury in Motion research vehicle in early 2015. The non-dazzle continuous high beam in HD quality uses chips with over one million micro-mirrors, and therefore pixels, per headlamp. As such it achieves ideal light distribution in all driving conditions and can also project light tracks onto the road to communicate with the surroundings.

The test drives forming part of the Intelligent World Drive are building on the comprehensive experience gained from preceding automated test drives. Australia is one of Mercedes-Benz’s core markets. Mercedes-Benz Australia has therefore already been testing automated driving functions with its own test vehicle based on the E‑Class since March 2017, in close cooperation with the Research and Development Center in Germany. This E‑Class is equipped with the software technology of the new S‑Class. Covering more than 20,000 test kilometres between Perth and Melbourne as well as Melbourne and Brisbane, it has collected valuable information on local traffic practices and road signs, and also comprehensively tested the digital map data from HERE. From December, this E‑Class will face the specific challenges posed by road traffic in New Zealand. 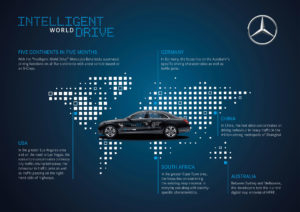 The special features in Australia show how important it is to gather worldwide insights into real-life traffic on the road to autonomous driving and to adapt automated driving functions to the particular traffic practices and conditions. With the Intelligent World Drive, Mercedes-Benz is testing automated driving functions on five continents over a period of five months.

The first drive of the test vehicle based on the S‑Class took place in September in Germany. The focus there was on assessing specific driving behaviour on motorways and in tailback situations. In the second leg in October, the automated S‑Class tackled the extremely dense traffic flow in the Chinese metropolis of millions, Shanghai, and collected information on infrastructural characteristics, such as such as lane-dependent speed limits and lane markings with several meanings, for example. The test drives in Australia will be followed in December by tests in South Africa, where pedestrian detection in many unfamiliar situations in particular will play a significant role. The final stop of the Intelligent World Drive will be the Consumer Electronics Show (CES) in Las Vegas In January 2018. The test drive in Greater Los Angeles and afterwards on to Las Vegas will concentrate on evaluating the driving behaviour in heavy American urban traffic and in tailbacks as well as when traffic is overtaking on the right on highways.

CASE – on the way to autonomous driving

In the past seven years, Mercedes-Benz has conducted about 5100 test drives around the world with 175 test vehicles for validations of driver assistance systems in the field alone. The majority of these have taken place as part of near-launch road trials. The performance of the driver assistance systems was assessed over some 9.5 million kilometres in Europe, the USA, China, Australia and South Africa, and more than 1.2 million measurements were made in real-life traffic situations in particular for their continuous enhancement.

Autonomous driving is one of the four strategic areas for the future which form an integral part of the corporate strategy of Daimler AG under the acronym CASE. CASE – these letters are shaping the future of mobility. They stand for networking (Connected), autonomous driving (Autonomous), flexible use (Shared & Services) and electric powertrains (Electric). The aim is to shape intuitive mobility for the customers through intelligent dovetailing of all four CASE fields.