Nissan’s stand highlighted Nissan Intelligent Mobility, the company’s approach to changing how
cars are powered, driven and integrated into society

DUBAI, UAE (Nov. 28, 2017) – Nissan showcased exciting prototypes and production cars at this
year’s Dubai International Motor Show, giving customers a glimpse of its newest and future
innovations. Nissan’s stand highlighted Nissan Intelligent Mobility, the company’s approach to
changing how cars are powered, driven and integrated into society. The next generation allelectric
Nissan LEAF was unveiled for the first time in the Middle East. 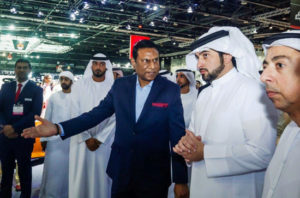 The Dubai International Motor Show is a high profile show visited by the key members of the
ruling family. This year, Nissan had the pleasure to receive the visit of His Highness Sheikh Ahmed
bin Mohammed bin Rashid Al Maktoum, Chairman of Mohammed bin Rashid Al Maktoum
Foundation. His Highness showed a very high interest for the EVs displayed as well as the
legendary Nissan Patrol Safari, which is deeply entrenched in the United Arab Emirates society and culture.

Nissan allowed visitors on its stand to discover how Nissan Intelligent Mobility will make driving
safer, smarter and more enjoyable, as well as tackle some of the world’s big challenges like
climate change, traffic congestion and road fatalities.

At the core of the Nissan stand, was the Nissan LEAF, the icon of Nissan Intelligent Mobility
combining electrification, advanced safety technologies and connectivity into one car that is simply
amazing. The Nissan LEAF was branded with the Expo 2020 logo following the appointment of
Nissan as the Official Automotive Partner for Expo 2020 Dubai. Electric vehicles including the allnew
Nissan LEAF will be part of the Expo 2020 fleet.

Also making its regional debut at the show was the Nissan BladeGlider, a working prototype high
performance electric vehicle with a revolutionary sports car design. A couple of days prior to the
motor show, Nissan BladeGlider starred in a video shot in the streets of Dubai to give a glance of
how EXPO2020 and Nissan will partner to shape the future of mobility.

GT-R crowned “Best Car Ever” at Dubai International Motor Show
Car enthusiasts in the Middle East crowned the Nissan GT-R “Best Car Ever” at this year’s Dubai
International Motor Show. During an open talk session called “Ignition Live Talks,” the GT-R
competed against 30 different models from various brands – all iconic and well-known. The
Porsche 911 and classic Ford Mustang landed second and third place respectively in the votes,
bringing Nissan additional confidence in the technology and craftsmanship to the customers in the
Middle East. This is one additional award for the GT-R, which has won numerous awards around
the world. But more importantly, this award is proof that the Nissan brand is strong and powerful
in the Middle East.

Automotive journalist Shahzad Sheikh explained how the audience was excited by the GT-R: “In the end we whittled down a list of well over 30 iconic and legendary cars to just three: the
Porsche 911, the classic Ford Mustang and the current Nissan GT-R. With the Porsche taking third
place as a huge crowd gathered to see who would win, it was down to just the Ford and Nissan. It
was extremely close in the end, but based on the audience response, the GT-R was definitely the
No. 1 choice.”
The MY17 Nissan GT-R at the Dubai International Motor Show embodied the latest design
language. The exterior has a chrome matte finish “V-motion” grille, a new hood and a windcutting
shape with the side sills pushed out to improved air flow. In terms of performance, the GTR’s
award-winning 3.8-liter, 24-valve twin-turbocharged V6 engine delivers 565 HP (EUR 570 PS)
at 6800 rpm and 467 lb-ft of torque. Each unit is handcrafted by its own TAKUMI technician.

More than 18,000 European customers took delivery of their zero-emission new LEAF in the January- June 2018 period. The new Nissan LEAF is the best-selling electric vehicle in Europe for the first half of this […]