A network of car charging stations is being developed in South Australia to allow Tesla drivers to visit the world’s biggest lithium-ion battery being built by Elon Musk in the state’s north.

Mitsubishi has also provided a fast charger at its own cost in the dedicated city charging area. 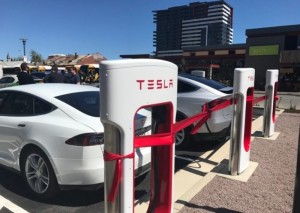 A Tesla charging station also opened today at the Clare Country Club to complement two existing chargers in the wine region about 140km north of Adelaide. From there, it is only about 90km further to the site of the world’s largest battery being installed by Tesla at Neoen’s Hornsdale Wind Farm north of Jamestown.

Tesla CEO Elon Musk flew into Adelaide, the South Australian capital, in July to announce his company would build the 100MW/129MWh lithium-ion battery in the state’s Mid-North.

The tech billionaire told reporters the Tesla Powerpack would be three times as powerful as the next largest lithium ion battery.

“I was made aware there was this opportunity to make this significant statement about renewable energy to the world,” Musk said in July.

“Coal does not have a long-term future.”

Musk will be back in Adelaide on Friday to update the International Astronautical Congress on plans by his company SpaceX to send humans to Mars in its Big Falcon Rocket.

It is not known if he will use the opportunity to make the trip north to Jamestown to check on the progress of the battery.

South Australian Energy Minister Tom Koutsantonis said construction at the site was well underway and the batteries were on track to be operational by December 1, the start of the Australian summer.

Surplus electricity generated at the site will be used as part of Tesla’s car-charging network, with 11 electric vehicle bays that will be supplied completely by solar power harvested from a 98 kWp array of 378 PV solar panels on the building’s roof.

Eleven more electric vehicle charging points will be installed in the Adelaide Central Market car park in the centre of the city by the end of November and another 25 will be built around the city by mid next year.

South Australia leads the nation in the uptake of wind energy and roof-top solar with renewable sources accounting for almost 50 per cent of the electricity generated in the state. However, the closure of two coal-fired power stations in recent years has increased South Australia’s reliance on energy supplies from the eastern Australian states, particularly in times of peak demand.

Tesla Semi has been unveiled in California