NIO ES8 has been awarded with a five star safety rating by the Euro NCAP for its outstanding performance in impact protection.

The NIO ES8 has been tested using the 2020 Euro NCAP protocols, passing a safety review that places even more stringent requirements on the active and passive safety of the vehicle. The new test procedure introduced frontal impact with a mobile progressively deformable barrier (MPDB), occupant protection in side impact, driver monitoring, rescue and recovery, additional automatic emergency braking (AEB) test scenarios, and increased the speed of the mobile side barrier to 60 km/h in the side impact test. 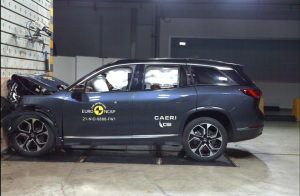 Key to the five-star rating are the high-strength all-aluminium body and active safety features that are standard on all NIO models. The ES8’s passenger compartment remained stable in the frontal impact test, with dummy readings showing good protection for the driver’s and front passenger’s knees and thighs. In both the frontal impact and the side impact against a barrier, the ES8 provided excellent protection to all critical body areas of the 6- and 10-year-old dummies and received full marks in this part of the assessment. The ES8’s AEB system performed well in the protection of vulnerable road users and in the tests between two vehicles. With outstanding results in the driver monitoring and lane support tests, the ES8 achieved 92 per cent in the safety assistance category according to the new protocols.

NIO will make its European premiere with the ES8 later this year. Sales of the premium electric SUV will start in Norway at the end of September.

The BYD e6 electric taxis is present in more than 10 countries, built by renewable energy company BYD and now has set its sights on the Southeast Asian motor hub of Thailand for its next […]