BYD has confirmed an order for the first ever pure electric buses for Jerusalem, the capital city of Israel, for seven 12 metre BYD electric buses.

The order is based on an earlier tender won by BYD in 2016. Seventeen buses were supplied to Haifa, a port city in the north of Israel, and have been in operation with public transport operator Egged since mid-2017.

Due to the excellent performance of those 17 vehicles in Haifa, especially on hilly terrain, Egged decided to place this additional order for ebuses in Jerusalem. Jerusalem is situated in a mountainous area and lies 800m above sea level.

The buses are expected to be delivered in the first quarter of 2019.

We are on a winning streak. In the past weeks we confirmed orders for Italy and Norway and we are now pleased to announce our second order for Israel. And there is more to come. The 17 buses that have been running in Haifa for almost a year are performing very well in the hilly and hot area and we are sure that these seven buses will live up to that. 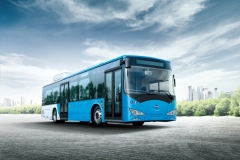 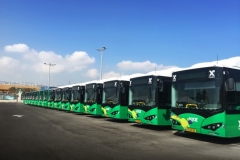 BYD and the local distributor for Uruguay Abriley S.A. delivered a fleet of 20 BYD 12-meter electric buses to CUTCSA in Montevideo, Uruguay. […]

Source: BYD Turin, Italy. 18th September 2017. A ceremony in the historic centreof Turin today inaugurated the arrival of the first zero emission pure electric BYD ebuses which are to go into service in Italy. […]