Miguel Pons and the LCR E-Team won in FIM MotoE World Cup at Montmeló, wrapping up the Catalan Grand Prix in style.

The Mallorcan rider made the difference aboard his Energica Ego Corsa as he made his way back to the front of the field entering the penultimate lap and pulled away just enough to cross the finish line unchallenged. 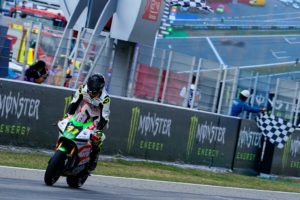 Behind him, front-row starters Dominique Aegerter (Dynavolt IntactGP) and Jordi Torres (Pons Racing 40) had another solid race as they rounded out the podium in second and third and separated by only 47 thousandths of a second at the chequered flag.

With the second place, Aegerter has cut Alessandro Zaccone’s lead in the standings down to one point, with Torres now only 11 points from the top. The Octo Pramac MotoE rider was fourth after edging his teammate Yonny Hernandez by 0.030secs.

The race saw a big blow in the title chances of Eric Granado (One Energy Racing), as the Brazilian rider could not get his bike going while on the grid and was therefore forced to start from pit-lane. As the lights went off, he tried desperately to make up as many positions as possible, but his effort eventually was halted by a crash. 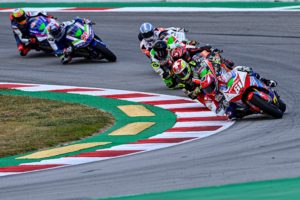 Avintia Esponsorama’s Xavier Cardelus crashed out at turn one during the opening lap, and the same fate occurred later on to Jasper Iwema (Pons Racing 40) and Mattia Casadei (Ongetta SIC58 Squadracorse).

Energica and the FIM Enel MotoE World Cup will be back in action in three weeks’ time at the ‘TT Circuit Assen’ in the Netherlands.