The FIM Enel MotoE World Cup riders had to face a last-minute downpour and tackle a whole different session aboard their Energica Ego Corsa.

Of the three riders who made their way to the Parc Fermé, only one eventually claimed a front-row start for today’s 15:30 race (postponed from its original start time at 10:05). Despite being one of the many riders who saw their lap being cancelled either for yellow flags or for exceeding the track limits, Miquel Pons (LCR E-Team) claimed second place on the grid behind the surprising pole-sitter Eric Granado (One Energy Racing), who led the session early on before crashing unhurt. 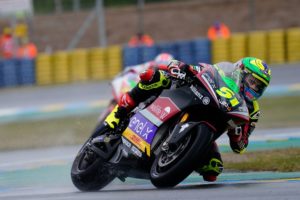 The front row is completed by Matteo Ferrari (Indonesian E-Racing Gresini MotoE), who had a bit of luck at his side after a challenging opening day, with Xavier Cardelus (Avintia Esponsorama Racing), race winner at Jerez Alessandro Zaccone (OCTO Pramac MotoE) and Dominique Aegerter (Dynavolt IntactGP) on row two – with the Swiss rider who lifted the #1 plate for the pole position before being demoted to sixth.

The wet and slippery track conditions at Le Mans led to many crashes, which involved – on top of the aforementioned Granado and Hernandez – also Lukas Tulovic (Tech 3 E-Racing), Mattia Casadei (Ongetta Sic58 SquadraCorse).