Daimler, Linde and TOTAL reaffirm their commitment to the clean fuel

An important step on the road to carbon-neutral electromobility

Federal Ministry of Transport and Digital Infrastructure approved grants of approx. €970,000 for the station

Karlsruhe, Germany. 6 September 2017 – A new hydrogen filling station in Karlsruhe adds further impetus to the building of an infrastructure for eco-friendly electric mobility using hydrogen (H2) and fuel cell technology. The TOTAL filling station on Karlsruhe’s Südtangente ring-road was commissioned on Wednesday. The Federal Ministry of Transport and Digital Infrastructure approved grants of approx. €970,000 euros for the hydrogen facility under its National Innovation Program for Hydrogen and Fuel Cell Technology (NIP). This H2 filling station – the eleventh in the TOTAL network and the tenth in the German federal state of Baden-Württemberg – is distinguished by an innovative energy concept: hydrogen is produced on-site through electrolysis, using the electricity generated by a solar array. This is one example for how renewable energy can be used in transport. 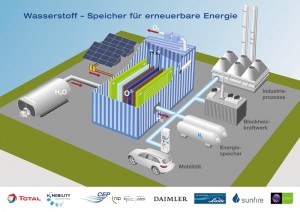 Fuel-cell vehicles, which use hydrogen to generate the electricity that drives their electric motor, are an important component for the electromobility of the future. Their advantages are long ranges exceeding 400 kilometres, and refuelling times of under five minutes. Operating a hydrogen-powered fuel-cell vehicle generates no local pollutants or carbon dioxide (CO2) emissions – which is why most leading carmakers are working on this technology. Daimler will soon be unveiling its latest generation of fuel cell vehicles based on the Mercedes-Benz GLC.

In the Clean Energy Partnership (CEP), the public and private sectors jointly laid the cornerstone for building a network of filling stations in Germany. Daimler is the investor behind the facility in Karlsruhe; the refuelling technology comes from Linde. The station will be operated by H2 MOBILITY, a new joint venture formed by the industry partners Daimler, Air Liquide, Linde, Shell, OMV and TOTAL in order to expand the nationwide hydrogen network to as many as 400 stations by 2023.

“Our support for the ramp-up of alternative drives is technology-agnostic. We want to be at the forefront of shaping the development. In this process, fuel cells are a key technology in turning the tide towards electromobility. Fewer emissions, quick refuelling, and a long range are the future of electric mobility. Each new hydrogen filling station takes us one step further in building a nationwide charging infrastructure. This helps us bring more clean vehicles onto our roads and ensure more mobility with fewer emissions.”

TOTAL has been involved in developing the hydrogen infrastructure in Germany for 15 years.

“Especially now, just before the International Automobile Exhibition, it is important for us to send a signal for hydrogen mobility with this service station. Fuel-cell vehicles are environmentally friendly, with long travel ranges and short refuelling times,” said the Managing Director of TOTAL Deutschland GmbH, Bruno Daude-Lagrave. “By using the electricity from a solar array to produce hydrogen, we show how tomorrow’s climate-neutral mobility can work.” 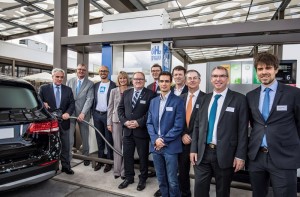 Other hydrogen projects at TOTAL are under construction or in planning in Cologne, Ingolstadt, Hamburg, Leipzig, Potsdam, Neuruppin and Hasbergen.

“The countdown has begun. In a few days, we will present our next-generation fuel-cell vehicles based on the Mercedes-Benz GLC. Battery and fuel cell technology, combined in an all-electric plug-in hybrid – this is unprecedented anywhere in the world. A rapid expansion of the H2 filling station network is thus especially important to us. The number of H2 petrol stations in Germany will increase rapidly, not least as a result of our H2 MOBILITY joint venture’s concrete development plans, and the everyday mobility of hydrogen mobility will continue to rise.” 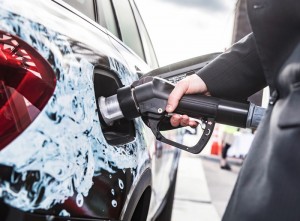 H2 MOBILITY is planning to commission further hydrogen filling stations in the months ahead and recently issued a call for proposals for additional filling-station locations: several stations are to be built in regions with the largest potential hydrogen sales for fuel-cell cars (700 bar). Nikolas Iwan, Managing Director of H2 MOBILITY GmbH & Co. KG, said:

“H2 MOBILITY has been tasked with building and operating a hydrogen infrastructure across Germany. This is unique: nowhere in the world is there a comparable business initiative that solves the chicken-and-egg problem so sustainably. By the end of 2018, 100 hydrogen stations will ensure a basic supply. If the introduction of hydrogen as a fuel is successful and the number of fuel-cell cars continues to grow, we will expand the network to as many as 400 hydrogen stations by 2023.”

“This is an exciting time for hydrogen mobility, as both the infrastructure and the range of vehicles are growing by leaps and bounds. Linde will continue to advance the entire spectrum of clean H2 technology – from production to application.” 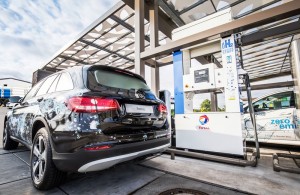 This hydrogen filling station marks the first time that a steam electrolysis plant in flexible operation is used for the production of hydrogen. It is funded by the state of Baden-Württemberg’s BWPLUS program and administered by the European Institute for Energy Research (EIFER). Steam electrolysers are excellent for converting electrical energy into chemical energy. Due to their high operating temperatures of up to 850°C and the possibility of supplying the required energy in the form of heat, significantly higher electrical efficiencies can be achieved than with low-temperature electrolysers.

“This project allows EIFER to research steam electrolysis technology, which has been tested and evaluated at the cell and stack level in our laboratories for several years now, at the systems level as part of its industrial application,” explains Dr Annabelle Brisse, who heads the EIFER project ‘Electrolytic Hydrogen’.

The scientific monitoring of the hydrogen filling station will involve testing the electrolyser’s load-sequence operating capability of over 5000 hours. Using a monitoring system, all of the facility’s system parameters will be recorded, and then evaluated and analysed by EIFER. As the supplier of the electrolysis facility, the Dresden company Sunfire is working to bring renewable energies into the mobility sector in an efficient way.

“This can happen directly as hydrogen at the filling station, or by supplying green hydrogen, synthesis gas or synthetic crude oil substitute (e-Crude) to refineries for the production of traditional fuels for combustion engines based on water, green electricity and CO2,” said Nils Aldag, Chief Commercial Officer at Sunfire. “The hydrogen filling station in Karlsruhe provides outstanding proof that Sunfire’s electrolysis technology is very versatile.”