After a smart ride at the Le Mans circuit Jordi Torres (Pons Racing 40) has clinched the 2020 FIM Enel MotoE World Cup in the final race of the season.

The experienced Spanish rider finishes his rookie campaign with the best possible result after crossing the line in sixth place. The title win came despite a very scary moment for Torres, who was hit in the back of his Energica Ego Corsa at turn two on the opening lap by Eric Granado, but fortunately for him he was able to stay on the bike and continue. 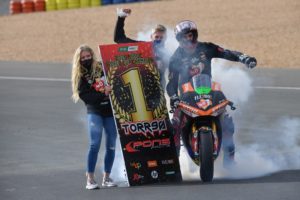 It’s a dream come true – said Jordi Torres. In this category anything can happen. In the first chicane I heard the sound of gravel and some riders coming from behind – and one even touched me. At this moment I thought I just had to finish the race and take some points because my team needed this title. It’s a big family and I want to thank them so much for putting me in a position to win this championship. We’ll see what happens in the future but now it’s time to enjoy with my family, friends and the team and that’s it; not much more to say!

The race itself saw a welcome return to the top step of the podium for Finland’s Niki Tuuli (Avant Ajo MotoE), who was able to defend his lead from Mike Di Meglio after a great drive out of the last corner allowed him to overtake the Frenchman as the two riders headed into the penultimate lap. Third place was taken by Josh Hook (OCTO Pramac MotoE), who spent the majority of the race in close proximity of the aforementioned duo. 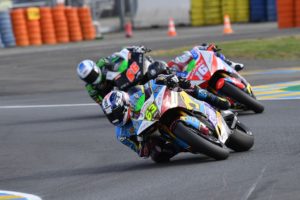 An incredible effort was put together from 14th and 15th on the grid by Dominique Aegerter (Dynavolt IntactGP) and Matteo Ferrari (Team Trentino Gresini MotoE), who crossed the line in fourth and fifth, respectively. The Swiss rider, who in race one yesterday was for the second time in a row this year an innocent victim of a collision triggered by a rival, was able to make up nine places in one lap, but was unable to get on the back of leading trio.

Former World Cup Champion Ferrari managed to overtake Torres at the start of the final lap, but his championship situation needed much more in terms of results to allow him to successfully defend the title – after first-lap crash on Saturday race while in the lead. Still, Ferrari was able to clinch the runner-up spot despite being tied in points – and wins – with Aegerter. The difference maker was the second place he scored in the opening race at Jerez.

The Energica team and the Ego Corsa machines will now return to Modena’s HQ to prepare for what will be another exciting season in 2021.