The line-up for the fifth season 2018/19 FIA Formula E Championship has been confirmed and will be 11 teams and 22 drivers in the electric car competition.

In fact this year’s the starting grid has been expanded to 11-team with the first round kicking off in Ad Diriyah, Saudi Arabia, on 15 December. 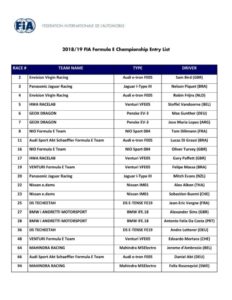 All four former champions return to test their mettle in the new FIA Formula E Gen2 car, with Jean-Eric Vergne hoping to become the first back-to-back champion in the history of the series with the DS TECHEETAH team.

Several other top talents are returning to the championship for the upcoming campaign having raced in Formula E before but not contested the full fourth season – these include Robin Frijns for Envision Virgin Racing and Tom Dillmann for the NIO Formula E Team.

With a new car, new racing format and plenty of fresh faces, the fifth season of the ABB FIA Formula E Championship is set to be the most exciting and unpredictable to date. 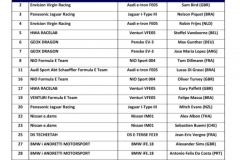 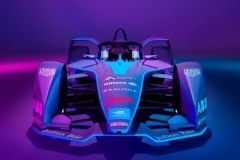