The new e-drive production location was announced by Michael Nikolaides, Head of Planning and Production Engines and E-Drives, and Frank Bachmann, Director of BMW Group Plant Regensburg, at an event with the Lord Mayor of Regensburg, Gertrud Maltz-Schwarzfischer.

Electric mobility is substantially driving growth for the BMW Group and this development is also reflected in our e-drive production – explained Michael Nikolaides. In 2020, we went full throttle on e-drive production. 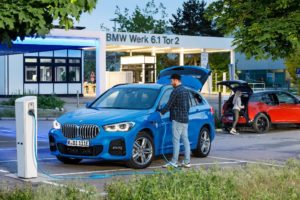 In July, the company opened the Competence Center for E-drive Production in Dingolfing and doubled the production capacity of high-voltage batteries at BMW Brilliance Automotive by opening another battery center in China. As recently as September, the BMW Group announced it would be producing battery modules at BMW Group Plant Leipzig from 2021.

Now Regensburg will see battery component production added in 2021, followed just a year later by high-voltage battery production. All of this demonstrates that we are consistently ramping up the production of e-drives – stressed Nikolaides.

In total, the BMW Group is investing around 750 million euros across its Dingolfing, Leipzig and Regensburg sites in expanding its production capacity for electrified vehicle drive components by 2022.

From 2021, BMW Group Plant Regensburg will not just produce electrified vehicles, but also e-drive components – said Frank Bachmann. We are investing over 150 million euros by 2022 in high-voltage battery production as well as the necessary components. A total of at least 300 future-proof jobs will be created in this new area of production until 2024.

High-voltage batteries are a cornerstone of this transition

BMW Group Plant Regensburg started production of two electrified models this year with the plug-in hybrid versions of the BMW X1 and the BMW X2. At the same time, with extensive investments and conversions, the plant is preparing itself so that moving forward it can respond flexibly to changing demand for different drive types.

Battery cell coating and high-voltage battery production will play a key role in this transition – said Plant Director Frank Bachmann. The coating of battery cells will start at the beginning of 2021. Coating the cells gives them greater mechanical robustness and better thermal conductivity. This allows for improved insulation and cooling of the even more powerful battery cells for the fifth generation of the e-drive. From 2022, the Regensburg plant will also produce complete high-voltage batteries from battery modules.

From battery cell to high-voltage battery 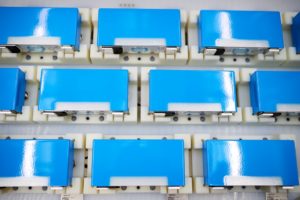 The production process for high-voltage batteries consists of two main steps and the battery modules are produced in a highly automated process. First, the lithium-ion cells undergo a plasma cleaning process. Specially developed equipment coats the cells to ensure optimal insulation. The battery cells are then assembled into larger units, known as battery modules. The BMW Group procures the battery cells from partners who produce them according to the company’s precise specifications and uses different battery cells, depending on which one provides the best characteristics for the relevant vehicle concept.

This combination of standardized battery modules and casings flexibly adapted to the vehicle has several advantages: Firstly, it ensures uniform properties and quality standards in the production of the high-voltage batteries. Secondly, the modular design of the high-voltage battery serves as the basis for a wide range of e-drive variants. Last but not least, this modular approach is a crucial prerequisite for being able to respond quickly to customer demand and take advantage of cost savings.

Global production network for e-drives with a focus on Germany 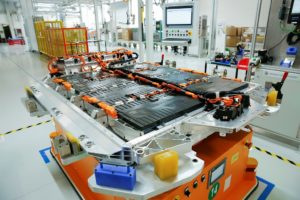 To date, the high-voltage batteries for all electrified vehicles of the BMW and MINI brands have been produced at the three in-house battery production facilities in Dingolfing, Spartanburg/USA and Shenyang/China. In Thailand too, the BMW Group has localized the production of high-voltage batteries for the Rayong plant in a cooperation project with the Dräxlmaier Group. The new battery component and high-voltage battery production at BMW Group Plants Regensburg and Leipzig will join this network from 2021 onward.  Munich is home to both the pilot plant for e-drives and the Battery Cell Competence Center. Here the BMW Group comprehensively analyzes battery cell value-added processes and keeps its production processes at the cutting edge.

The company produces electric engines at the Competence Center for E-drive Production in Dingolfing and BMW Group Plant Landshut. Accordingly, the BMW Group will in future produce e-drive components in large-scale series production at seven locations worldwide, four of them in Germany.

Ramping up e-drive component production capacity is key to meeting the BMW Group’s ambitious electric mobility targets. As early as 2021, one in four BMW Group vehicles sold in Europe is expected to be fitted with an electric drive. By 2025, it’ll be one in three, and one in two by 2030. By 2023, the BMW Group will have 25 electrified models on the road, half of which will have an all-electric drive.