Called the MOTOROiD, technical details on the futuristic bike have not been fully revealed, but it features cylindrical batteries marked “Caution: High Voltage” where the engine is typically located and thick orange cables connected to a rear hub motor. 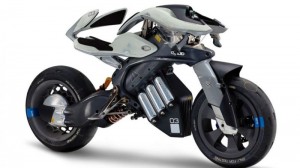 There’s also a unique rear suspension with the shock mounted below the swingarm and a pistol grip steering system with an unclear connection to the front fork. Its scant bodywork includes a faux gas tank cover for the rider to lean on and a wraparound rear seatback.

According to Yamaha, technology allows the bike to interact with its rider like a living creature. 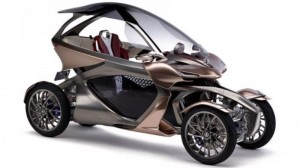 Along with the MOTOROiD, Yamaha is also bringing a tandem two-seat, four-wheel vehicle to the show that can lean into turns like a motorcycle.

The MWC-4 is powered by batteries, but has a range-extending gasoline generator for long trips. Yamaha says its design was inspired by motorcycles and musical instruments, which the company also makes.