September 15, 2017. Not only will this massive electric dump truck replace a dirty diesel truck, but it will also be an “energy plus” vehicle.

A consortium of Swiss companies is working on an electric vehicle project that will never hit public roads, but which could be pivotal for electric mobility, and a gamechanger for heavy industry. The so-called “e-dumper” is being built from a massive Komatsu dump truck that weighs 45 tons when empty and has tires as tall as a person, and although that might initially seem like a strange choice for electrification, its intended usage is expected to produce a net surplus of electricity rather than draw a huge amount of grid power.

The project will capitalize on one of the strengths of electric vehicles, which is that the electric motors that drive them can also be used to brake the vehicle, which generates electricity. This regenerative braking feature isn’t meant to, or able to, fully recharge the vehicle’s battery in most cases, but for a big electric vehicle that travels downhill while fully loaded, using the electric motors as brakes and generating electricity, and then travels back up again when empty, it can produce a surprising amount of electricity. In this case, the Swiss e-dumper will generate an estimated 10% surplus with each trip it makes, essentially becoming an “energy plus” vehicle instead of a net consumer of electricity. 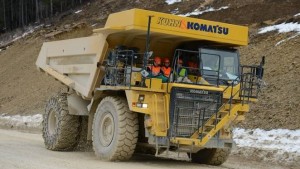 Although the most visible example of the future of electric mobility is the consumer electric car, the commercial transportation sector and heavy industry are two major areas where transitioning to cleaner fuels will have a big impact on air quality, GHG emissions, and other undesirable consequences of fossil fuels. Electric city buses, trains, semi trucks, delivery vehicles, shuttles, and even airplanes are either already in operation or currently under development, but the news of this particular project caught my attention for another reason. It’s an example of a potential application for clean electric drive systems to meet a need that isn’t obvious to industry outsiders, and one that could potentially also have a high rate of return in the right locations.

If you’ve never spent any time around large mines or quarries, it can be hard to visualize how massive some of these mining and heavy industry machines are, and although there are plenty of larger ones than the Komatsu model that will become the e-dumper, this one is still an enormous piece of equipment. When complete, the empty vehicle will weigh a hefty 45 tons (90,000 pounds, or 40,800 kg), and can carry a payload of another 65 tons, which would burn a lot of diesel in a day’s work, but this one is outfitted with a storage capacity of 700 kWh in its batteries (said to be the equivalent of 8 Tesla Model S battery packs). The battery packs, which consist of some 1,440 nickel manganese cobalt battery cells, weigh a total of 4.5 tons and will be mounted on the truck’s chassis.

In a few months, it’s expected that the e-dumper will resume its 20-trip per day task of hauling full loads of material from a quarry on a mountain slope down to cement plant in the valley below, and to then return empty to the quarry for another load. In this application, the truck will essentially be under a heavy load and using the electric motors to brake the entire way down to the lower elevation, which is expected to generate a surplus of 10 kWh of electricity with each roundtrip it takes. Not only will the converted Komatsu HD 605-7 dump truck be able to export electricity to the grid each day, but it will make for a much quieter and cleaner vehicle than anything else on the site.

Of course, all of this is new territory, so any expectations or estimations need to be taken with a grain of salt, and an understanding that this vehicle is essentially a prototype of a retrofitted heavy hauler for a specific location and application (which also happens to remind me of the train battery). The actual results of the harsh conditions and heavy loads and high electrical currents involved in the e-dumper project should also serve to inform and inspire other electric mobility technology development efforts in the industrial and commercial space.

The e-dumper project is being funded by Ciments Vigier SA, but a team of people from two project partners, Lithium Storage GmbH and the Kuhn Group, is working to bring it to life, and the vehicle is currently undergoing the conversion process at Kuhn Schweiz AG. According to Ciments Vigier SA, if the project is as successful as hoped, the company could put 8 of the electric dump trucks to work at its operations in the future.