The Government funded trial to new zero emissions delivery methods in the city with £200,000.

Named Aria and Atlas by Oxford City Council, the two EAV2Cubed vehicles will be used by the various businesses of the Covered Market. As one of the rear cargo bays is refrigerated, it’ll be used for delivering fresh flowers, chocolate, meat and even artisan ice cream around the centre of Oxford. 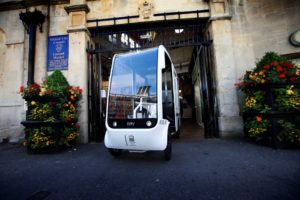 The Zero Emission Zone Pilot will restrict polluting vehicles from key Oxford city centre streets during the day. Those who drive polluting vehicles into the zone will be charged, with the level of the charge dependent on how polluting the vehicle is.

Traders in Oxford’s landmark market have been consulted on the scheme over the past few years. Under the scheme, zero emission vehicles, such as the EAV2Cubed, will not be charged to drive in the zone.

Data published last week found that the significant reductions in traffic caused by coronavirus pandemic resulted in a 29% improvement in air quality levels across Oxford to the lowest measure of air pollution since recording first began in 1996 and the equivalent reduction from 2009 to 2019.

Now, as Oxford emerges from the pandemic, the Council is exploring how it can learn from the lockdown period to ensure Oxford has the cleanest air possible.

According to Oxford’s most recent source apportionment study, the transport sector is the largest contributor of NOX emissions in the city, accounting for 68% emissions.

The EAV2Cubed vehicles will help to reduce the carbon footprint of the market, ease congestion in the city centre, and will also contribute to the achievement of Oxford’s new proposed NO2 local target, which was set out in the city’s Air Quality Action Plan.

The Oxfordshire based micro-mobility manufacturer Electric Assisted Vehicles (EAV), recently put to the test by Asda its 2Cubed commercial vehicle. […]