Rivian R1T electric pick-up will be equipped with tailor made Pirelli Scorpion, a special version of the tyres that deliver silence on board and low rolling resistance.

The same tyres will be use by Rivian to the electric SUV R1S, both of 21 inch unique size.

Pirelli has developed special versions of its Scorpion Verde All Season, Scorpion Zero All Season and Scorpion All Terrain tyres (Pirelli’s dedicated range for SUVs and pickups) to meet Rivian’s specifications, and to enhance the vehicles’ unique characteristics following the “Pirelli Perfect Fit” strategy. Indeed, all Pirelli tyres developed for Rivian have a special marking on the shoulder: RIV and Elect.

“Elect” is the marking that identifies Pirelli tyres for electric vehicles. Tyres play a crucial role in EV performance – they are a key safety, performance, and range optimiser. 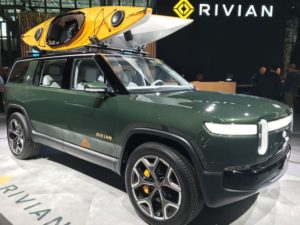 Pirelli tyres marked “Elect” offer a number of advantages for electric vehicles, thanks to a specific set of technical characteristics. Low rolling resistance helps to maximise each car’s range. In electric cars, reduction in noise accentuates one of the key advantages of electric driving: silence. Finally, the Pirelli tyres marked “Elect” offer improved traction in line with the intense demands from the transmission. Electric motors deliver the maximum torque available right from the bottom of the rev range, and so they need tyres that can bite into the asphalt instantly.

Pirelli and Rivian co-developed these products over almost two years, and this collaboration has resulted in three special tyres: 20, 21 and 22 inches. In particular, the Scorpion Verde All Season in 21 inches have a very special tyre size, unique in the world, introduced in the industry by Pirelli specifically for Rivian: 275 55R21. 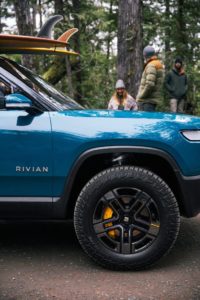 The technical partnership with Rivian underlines the focus of Pirelli on sustainable mobility and American car brands.

The main challenge Pirelli’s technicians had to face to develop a dedicated version of these tyres for Rivian was to meet their low rolling resistance targets.

Pirelli’s engineers worked on a higher-silica compound that decreases the vehicles’ energy consumption. Then, they worked on a dedicated design of the mould, narrowing the tread pattern of the tyres and keeping an optimal footprint pressure distribution. In this case reducing surface-to-ground contact translates into less energy dissipation.

The Pirelli Scorpion Verde All Season for Rivian increases efficiency and range. It is also designed to combine dry and wet road handling, comfort and year-round capabilities, including all-season traction in light snow

If “Verde” in the Pirelli vocabulary defines its environmentally friendly tyres with low rolling resistance and weight, “Zero” definitely indicates its high-performance range. 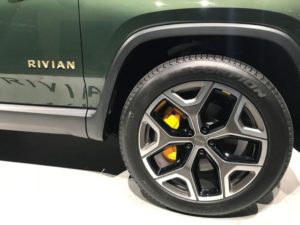 In particular, the Scorpion Zero All Season tyres are developed for the drivers of powerful crossovers and SUVs, as well as sport-tuned and performance pickup trucks looking for a combination of high-performance capability with all-season utility, including the ability to drive in snow.

For its vehicles, Rivian asked Pirelli to develop an even “grippier” version of its Scorpion Zero All Season tyres. To achieve this request, Pirelli’s engineers introduced nano-composite compounds to ensure maximum grip and stability.

Then they focused on the tread pattern, introducing a dedicated mould with a larger tread width, able to provide more contact area and, consequently, leading to a better handling performance.

All of that, without compromising the low rolling resistance targets needed to support a longer vehicle range.