The new agreement has been signed by further three-year deal valued at $7.3 million, aimed to deliver thousands of its in-wheel motors accelerating the rollout of the state-of-the-art autonomous vehicles around the world.

The Olli autonomous shuttle is in use today on campuses and city streets in the Americas, Europe and Asia. Olli’s autonomy system ensures safe autonomous operation and delivers an unmatched rider experience, thanks in large part to the ProteanDrive in-wheel motors, which are lighter, smoother, and more energy-efficient than alternative solutions such as e-axles. The ProteanDrive in-wheel motors also allow Local Motors to maximise passenger space, vehicle range, and platform reliability while reaping the cost benefits delivered by this best-in-class electric wheel technology. 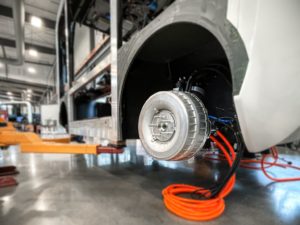 This major new order for ProteanDrive in-wheel motors comes amid burgeoning market demand for battery electric vehicles (BEVs); according to research from BloombergNEF, adoption of BEVs is set to grow from just three per cent of global automotive sales in 2020 to 28 per cent in 2030 and is expected to reach 58 per cent by 2040. Protean Electric is primed to capitalize on this significant growth opportunity; the company has been developing and refining its IWM technology for the past 12 years and is meeting the market with a reliable, tested solution ready for massive deployment. In addition to Local Motors, Protean is currently deeply engaged with four major automotive OEMs.

The accelerating climate crisis further underscores the urgent need to transition to BEVs; because road transportation is estimated to account for approximately 17 per cent of greenhouse gas emissions, the electrification of the automotive industry could drive significant, positive impact in the battle against climate change. The Local Motors/Protean Electric partnership represents a critical proof point for the reduction in carbon per passenger mile, offering an alternative autonomous transport solution that improves mobility for all of society.