MG Motor added in the range the new MG5 EV and MG HS Plug-in, on sale since Q4 2020 and that join the MG ZS EV full electric.

All New MG5 EV and MG HS Plug-in are expected to help MG to reach a tipping point in 2021 with plug-in cars accounting for over 50% of MG Motor UK’s total sales. With a range of three plug-in cars, MG is further strengthening its position as the go-to brand for mainstream, affordable electric cars.

The All New MG5 EV takes MG – and the fully electric car – into an entirely new market sector, while the MG HS Plug-in is a high quality, great value C-segment SUV with a PHEV powertrain.

All New MG5 EV is unique in Britain’s EV market, offering the flexibility and practicality of a capacious estate car with great driving dynamics and absolutely no exhaust emissions. MG5 EV is the perfect addition to MG’s rapidly expanding electric car portfolio, alongside MG ZS EV and new MG HS Plug-in, which together are expected to account for over half of MG’s UK sales in 2021. The brand is already the fourth most popular EV brand in the UK and the latest model will further strengthen its position. 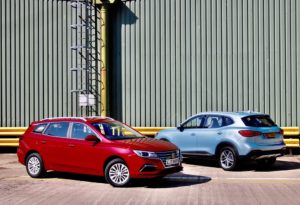 Like all MG models, all New MG5 EV comes with a 7 year / 80,000 mile fully-transferable warranty as standard. It is powered by a 115kW electric motor (equivalent to 156PS), giving acceleration of 0-60mph in just over eight seconds, with a 52.2kWh Lithium-Ion battery pack that can be charged from zero to 80% in just 50 minutes using a rapid charger. MG5 EV has a WLTP-approved combined range of 214 miles in normal day-to-day use. This rises to 276 miles if the car is used solely for urban driving.

MG5 EV’s lively motor sends power to the front wheels, which gives the car sound handling characteristics with an assured feel thanks to its low centre of gravity. The battery pack, meanwhile, is cleverly mounted beneath the floor of the car, maximising interior space for both passengers and luggage.

The new MG HS Plug-in SUV goes on sale in October with a great value entry price of £29,995 and adds a new dimension to MG’s electrified drivetrain line-up, building on the popularity and success of MG ZS EV.

It becomes MG’s first model to feature a Plug-in Hybrid drivetrain, using the existing model’s 1.5-litre turbocharged engine working in tandem with a 90kW electric motor to give an EV-only range of 32 miles with zero tailpipe emissions – plenty enough for most commutes.

Together the electric and petrol motors develop a combined power output of 258PS, giving the model a performance advantage, too. It has the ability to accelerate swiftly from 0-60mph in 6.9 seconds. MG HS Plug-in also introduces an innovative new 10-speed transmission which works with both the petrol and electric motors to optimise power delivery and efficiency. 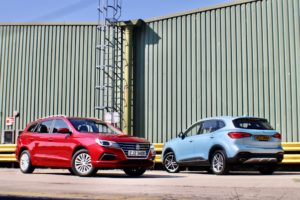 Power from the petrol engine is channelled through a six-speed automatic gearbox, while the electric motor transfers power through a four-speed electronic drive unit. Together they combine to provide 10 electronically controlled gear ratios that always provide the optimal gear combination, keeping emissions as low and driver enjoyment and performance as high as possible.

In EV-only mode emissions are 0g per km and this gives a range of up to 32 miles. But in hybrid mode the range of the car is limitless, making it ideal for longer journeys and family holidays when you can put petrol in if needed and not fret about the electric range.

Using a Type 2 fast charger, the MG HS Plug-in can be charged from zero to 100% in just three hours.

Two trim levels are available – Excite and Exclusive – both with high equipment levels.

MG currently has a network of 112 dealers with further expansion planned before the end of 2020.