As a provider of comprehensive electromobility solutions, Mercedes‑Benz doesn’t just deliver electric buses, it also takes care of the adaptation of the service yard, the equipment and setting up of charging infrastructure, as well as the charging management process itself.

Due to its outstanding features, the new eCitaro has won through in no time. Wiesbaden’s invitation to tender however also shows the systemic challenges involved in the introduction of e-mobility, which we are happy to play a part in.

We are now starting to realise our vision of emission-free driving in Wiesbaden’s public transport. And in this regard, we want to take the lead in Germany. 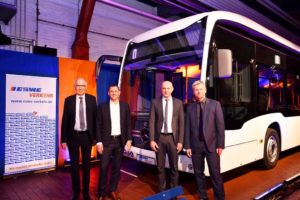 The order is the newest record in the large-scale order for 56 buses from ESWE Verkehrsgesellschaft mbH in Wiesbaden. The state capital of Hesse will receive the first ten eCitaro buses from the order this year already, while the remaining buses will be delivered next year.

The first 15 eCitaro for Wiesbaden will be equipped with current-generation lithium-ion batteries. These are NMC batteries (lithium-nickel-manganese-cobalt-oxide cells). Each eCitaro is equipped with twelve battery packs with a total capacity of 292 kWh.

The remaining 41 eCitaro will be equipped with solid-state batteries. With this new battery technology, the eCitaro once again takes on a leading role, and is even among the pioneers in automotive construction. Solid-state batteries have a very high energy density. In this case, seven battery packs are sufficient in order to provide a huge battery capacity of 441 kWh. Even in winter when faced with the difficult demands of using all-electric heating, the eCitaro can still cover more than 200 km according to the SORT 2 testing method. All 56 buses are charged by plug in the depot.

Electric bus and infrastructure from a single source

A special aspect here is that Mercedes-Benz has taken on the role of general contractor, supplying the complete system including the construction measures for the infrastructure – a first in Germany. In this context, the existing depot will be reorganised, modified and successively equipped with charging stations for the buses. Planned tasks even include building the transformer station for converting medium-voltage to low-voltage electricity as well as the installation of cables on the site.

Using the example of Wiesbaden, we want to gain a full and detailed understanding of introducing e-mobility in all of its multiple aspects in order to derive new ideas on how to optimise the overall system. But particularly due to limited capacity, this is going to remain an exception at least for the foreseeable future.

Charging management is also part of the order. It will be realised together with the Berlin-based partner company IVU Traffic Technologies, a renowned specialist for customised IT solutions. First of all, this involves assigning each bus a defined charging point upon arrival at the depot. Smart charging management ensures that all buses are charged with the necessary amount of electricity for their next trip. This also includes preconditioning, i.e. the temperature control of the passenger compartment and batteries, and thus ensures maximum efficiency. Vehicle servicing for ESWE’s eCitaro buses will be carried out in co-operation with Taunus Auto Verkauf AG (TAV) located in the immediate vicinity.

ESWE Verkehrsgesellschaft mbH operates Wiesbaden’s local public transport and has a fleet of 271 buses. With 41 bus lines, its buses transport nearly 60 million passengers a year. Of its roughly 1100 employees, two thirds work in the transport service. With the introduction of the eCitaro, ESWE is putting an ambitious plan into effect: within just one year, the company is changing a fifth of its bus fleet to fully electric vehicles.

The majority of the vehicles in the fleet are Mercedes-Benz Citaro.

Premiere at the IAA in Hannover to Mercedes-Benz eCitaro

Mercedes-Benz eCitaro will celebrate its public premiere at the International Commercial Vehicle Show (IAA) in Hanover in September. The new Mercedes Benz eCitaro raises electromobility for city buses to a new level – and this […]