This mobile robot is one of many projects pursued by the Fraunhofer Italia Innovation Engineering Center to close the gap between robotics and the building industry.

Researchers are working with a mobile robotic platform called Husky A200 that could be used for autonomous logistic tasks on construction sites.

Researchers at this center based in Bolzano, Italy, are developing a software interface that will enable mobile robots to find their way around in construction sites.

The legally independent Fraunhofer affiliate is tapping a technology called building information modeling (BIM) to develop software systems and interfaces to that end. BIM tech affords everyone with a need to know – planners, building owners, construction workers, technicians, facility managers – access to a digital data model of the building throughout its life-cycle.

On the one hand, we aim to establish and apply BIM in South Tyrol. On the other hand, we want to bring digital planning to the construction site and build a bridge between construction and robotics – says Michael Terzer, a research fellow and member of the Automation and Mechatronics Engineering team at the Bolzano Center.

He has joined forces with colleagues from the Process Engineering in Construction research team in the ROSBIM project to develop a software interface to link BIM with the Robot Operating System (ROS). This modular open-source software is installed on a mini PC located on the mobile robot. The development tool is platform-independent, so diverse types of robots can accommodate it. The ROS supports various programming languages. 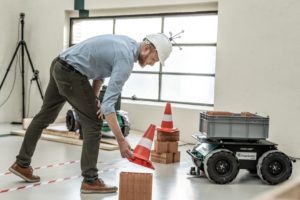 The interface uses the Industry Foundation Classes (IFC) file format. They serve to load digital object-oriented information to the robot.

A construction site is animate and constantly changing. The ROSBIM interface receives time-sensitive data such as information about obstacles that the robot cannot detect with its sensors. This way, the robot can be alerted to things like an open cable pit or elevator shaft on a given day at the construction site so that it can navigate around these pitfalls. That means the robot can constantly revise its obstacle map via the Robot Operating System – says Terzer. All data is archived in the BIM database and has to be constantly updated. Digital object-oriented information is relevant to every stage of the construction process from planning and building to facility management and infrastructural upgrades.

Digitalization offers the construction industry unprecedented possibilities for an integrative way of working. BIM is a key component in the digitalization of construction. The combination of this innovative working method and robotics is one of the many opportunities that digitalization offers to this industry. At Fraunhofer Italia IEC, we have created an interface that connects BIM to commercially available research robots so they can use BIM data – says Carmen Marcher, leader of the Process Engineering in Construction research team.

Designed for harsh environments, this mobile robotic platform is equipped with an electronic control unit and acceleration, laser and inclination sensors to help it navigate rough terrain. For now, though, the robot is confined to roving the grounds in Bolzano’s NOI Techpark. Serving as a sort of logistics sidekick on the construction site, it tags along with the human construction worker that activates its follow-me function. However, the mobile robot can drive itself, as the researchers were able to demonstrate in initial indoor trials.

With the help of its digital map, the robot can independently move loads from A to B, for example. However, autonomous locomotion in unstructured environments is a complex matter, so this will require steps to develop it further – says Terzer. The information the robot platform receives by means of BIM data can help improve its navigation capabilities and augment its sensory perception. Other applications are entirely feasible – for example, farmers could find a use for such mobile robotic assistant.

Digitalization, the key to enhanced efficiency

The Fraunhofer Italia Innovation Engineering Center in Bolzano focuses on digital transformation and automation. Its research and development efforts center on digitalization in construction, flexible automation in industry, skilled labor and agriculture, and digital business models. 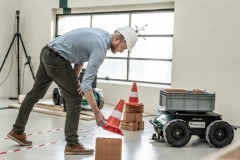 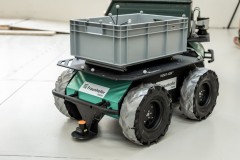