EDEKA, the German retail association, will test a 25-tonne truck Mercedes-Benz eActross with refrigerated body for one year in Berlin, to transport fresh, temperature-sensitive foodstuffs. 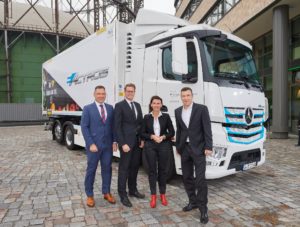 The daily route from the warehouse in Grünheide on the outskirts of Berlin to various EDEKA supermarket branches in the city centre and surrounding areas is between 150 and 300 km. The vehicle will operate in a double shift pattern. The weight of the transported goods can be up to 10 tonnes. During loading and unloading, the vehicle is charged to ensure that the total range of the eActros (up to 200 km with a single battery charge) is optimally utilised. EDEKA is the only company from the retail sector in Germany, which will use the eActros in its own fleet of vehicles.

The symbolic handover of the vehicle to EDEKA took place at the Gasometer in the Berlin-Schöneberg district. In addition to representatives from  Mercedes-Benz Trucks, EDEKA and truck body manufacturer Schmitz Cargobull, Rita Schwarzelühr-Sutter, Parliamentary State Secretary at the Federal Ministry for the Environment, Nature Conservation and Nuclear Safety, also took part in the event. 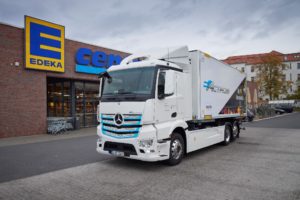 EDEKA is one of a group of 20 customers – all from various industries – that are now integrating the heavy-duty electric truck into their fleets. Each of these selected customers will put a near-series version of either the 18 or 25-tonne variant through its paces in real operations and will test the respective vehicle for its suitability for their daily field of work. The aim of Mercedes-Benz Trucks is to make emission-free and quiet driving a reality in cities from the year 2021, also with series heavy-duty trucks – and all of this as economically viable as with a diesel truck. The test series consists of two phases, each with ten customers and spanning a total of around two years. The development and testing of the heavy-duty electric truck in short-radius distribution operations is sponsored as part of the “Concept ELV²” project to varying degrees by the German Federal Ministry for the Environment (BMU) and the Federal Ministry for Economic Affairs and Energy (BMWi).

EDEKA is making a valuable contribution ahead of the market launch

We are delighted that EDEKA – a long-standing customer – is now also testing the eActros. Thanks to their practical deployment of the eActros, EDEKA is making a valuable contribution to the truck’s further development ahead of its market launch. It goes without saying that we are very thankful to the retail association for their active support. Our previous results from numerous tests have been nothing less than very positive. The 200 km range, for example, is totally realistic, and the cooling and air-conditioning systems have performed well, even during this year’s record-hot summer.

EDEKA itself is also eagerly awaiting the results of the on-road testing:

Being involved with future technologies plays a key role for EDEKA as a driver of innovation in the retail sector – affirms Rolf Lange, Head of Corporate Communications at EDEKA’s Hamburg headquarters. We are already committed to reducing emissions in many areas – particularly when it comes to logistics. This is where electric mobility comes in as it presents many opportunities but also poses several challenges. We look forward to gaining valuable experience with this on-road test in Berlin. 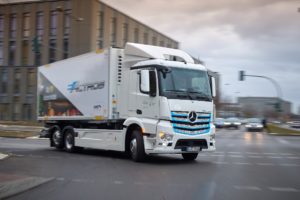 The removable container on the eActros used by EDEKA is the “W.KO COOL” model supplied by Schmitz Cargobull. It has optimum insulation for energy-efficient transport of refrigerated goods. This robust body is ideally suited for intensive day-to-day use. Cooled entirely by electricity, the cooling unit is totally emission-free and is specially designed for use in distribution transport.

Electric mobility for commercial vehicles is a highly significant topic that opens up new opportunities. We will utilize them with our refrigerated unit. We can gain valuable experience on the critical factor of shared energy management between the truck and cooling unit through joint testing with Mercedes-Benz Trucks – says Boris Billich, Member of the Board of Management for Sales at Schmitz Cargobull.

The first eActros of the “innovation fleet” has been in service at a customer since September. The rest of the first phase of vehicle hand-overs will be completed by the end of the year. All test customers operate in short-radius distribution and use the eActros for tasks which would otherwise be carried out by conventional diesel vehicles – the customers cover a broad spectrum of different sectors and categories. The palette ranges from food to building and industrial materials. The bodies vary from refrigeration units to dry containers, silos or tarpaulin-covered units.

The eActros: architecture based entirely on electric drive 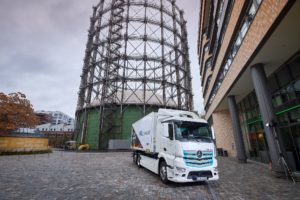 The drive comes from two electric motors near the wheel hubs on the rear axle. Their output is 126 kW each, and the maximum torque is 485 Nm each. Downstream of the transmission that is 11 000 Nm each. The driving output is therefore on a level with a diesel truck. The maximal permitted axle load is the usual 11.5 tonnes. The energy is stored in lithium-ion batteries with a capacity of 240 kWh. Depending on the available charge, fully charging takes between two and eleven hours (at 150 or 20 kW). 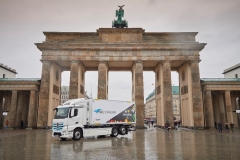 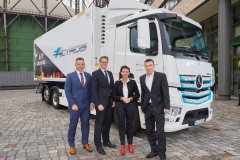 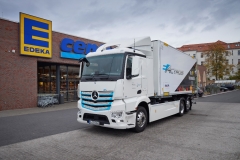 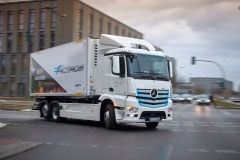 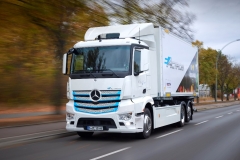 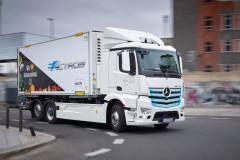 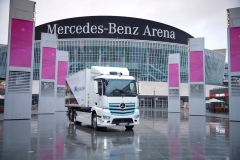 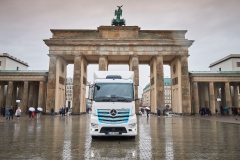 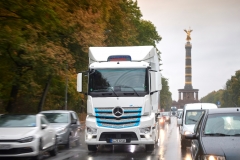 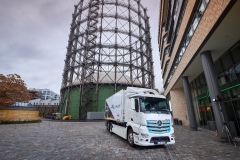 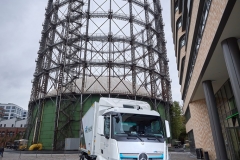 The truck for heavy-duty distribution Mercedes-Benz eActross beginning the practical operations with Hermes, the first of 20 test customers in different sectors. Hermes will integrate the electric truck into their fleets and each customer will […]