The local transport company Dresdner Verkehrsbetriebe is running in the city center with the Mercedes Benz eCitaro electric buses.

The City bus route 68 operated by Dresdner Verkehrsbetriebe (DVB) is part of the backbone of local public transport provided by buses in Saxony’s state capital. It has now been fully electrified – with around 150 buses Mercedes-Benz eCitaro fleet on 29 routes. 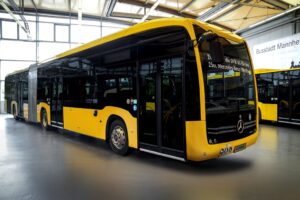 Whether it was the Mayor of Dresden, Dirk Hilbert, State Secretary Ines Fröhlich from the Saxony State Ministry for Economic Affairs, Labor and Transport, or the Board of Management and Supervisory Board of Dresdner Verkehrsbetriebe – they have all been accompanying this major step towards electrifying city bus transport in Dresden.

DVB’s 22.3-kilometer-long 68 route runs from Goppeln to Niederwartha through the center of Dresden. By running the all-electric eCitaro, the primary objective is to help improve the local air quality. The route is also marked by a number of substantial inclines. Initially, eleven eCitaro G articulated buses will be used during the holiday schedule. Later, up to 16 eCitaro will be in use on working days. Dresdner Verkehrsbetriebe will be using two more eCitaro solo buses on route 81 on the outskirts of the city.

This will connect Dresden’s Neustadt with the important commercial and electronics sites in the north and is characterized by a particularly challenging topography.

In total, Dresdner Verkehrbetriebe has ordered 18 eCitaro G and two eCitaro buses. This means that around 15 percent of the bus fleet has now been fully electrified. The vehicles that have already been delivered have been undergoing intensive testing since June and have already covered more than 20,000 kilometers without any problems. The buses are then charged at the depot at night. In addition, charging is also carried out during the day at the route terminus using a pantograph.

eCitaro equipment is both safe and convenient 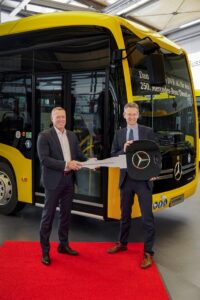 DVB has prioritized both safety and convenience in its equipment. This becomes when looking at its articulated buses. Four doors ensure a rapid flow of passengers. At doors two to four, red flashing light strips and a buzzer warn immediately before closing, and the driver can also monitor doors three and four by CCTV. The interior of the buses also features CCTV.Passengers can sit on City Star Eco seats with fabric covers. Two special-purpose areas offer space for wheelchairs or pushchairs. The inside of the side walls is clad with homely looking needled felt. Two TFT screens are used to provide passenger information and passengers can enjoy their own entertainment using an on-board wireless network.

A driver’s door with a partition screen protects against the risk of infection, while a refrigerator box keeps beverages at the right temperature. Thanks to the Sideguard Assist turning assistant and the Preventive Brake Assist active brake assistant, the buses boast some exemplary safety equipment.

Dresdner Verkehrsbetriebe: around 150 buses on 29 routes

Dresdner Verkehrsbetriebe moves more than 500,000 passengers every day. Around a third of these use buses on 29 routes. The fleet consists of around 150 vehicles. Daimler Buses has been supplying the transport company since 1990. The 250th #bus with the famous star was handed over in May 2022.