The Swiss leader in electric vehicle charging stations, Green Motion, signed a partnership with SolarXplorers as part of the SolarStratos project. Under this contract, Green Motion becomes official supplier to this venture, the aim of which is to construct a solar airplane capable of reaching the stratosphere. 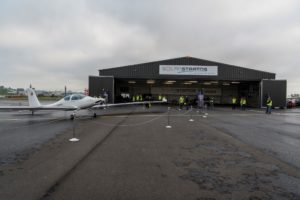 It is this avant garde aspect of the two companies and the passion of their respective founders that gave rise to this joint venture.

Raphaël Domjan’s project represents the peak of that which is currently feasible in solar flight. At the head of Green Motion, François Randin develops increasingly efficient technologies in its field.

Green Motion will furnish SolarStratos with a rapid charging station capable of transforming alternate current into direct current, considerably more efficiently than those designed for the general public.

Incidentally, this new type of station will be launched on the market in 2018. Linking up with the SolarStratos project provides Green Motion with a magnificent showcase for its cutting-edge technology, in an environment itself recognised for its innovative and visionary expertise.

The UK government is to act to break the monopoly on electric car charging at motorway services to ensure the points are reliable and can be accessed by anyone. […]