This is a momentous occasion for BYD – said BYD Europe Managing Director, Isbrand Ho – and also represents a huge commitment to electric mobility since it becomes the largest European fleet ever switched to electric at one time.

The deal was reached following close cooperation between Keolis and BYD to devise a demanding whole-life package which delivers a total transport solution and takes into account operational needs and passenger comfort requirements. 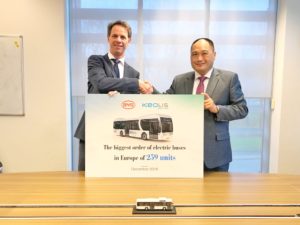 The deal was confirmed on Friday 6th December at Keolis’ head office in Deventer in the Netherlands with the contract being signed by Frank Janssen, the CEO of Keolis Nederland and Isbrand Ho, Managing Director of BYD Europe.

For Keolis Nederland, BYD’s 8.7-metre midi bus, 12-metre and new 13-metre eBus models will enter service from the end of 2020 on routes throughout the Netherlands’ IJssel-Vecht region, including front-line operations in the municipalities of Zwolle, Apeldoorn and Lelystad.

BYD’s 13-metre model is equipped with new upgraded battery technology to provide extended range and ‘city-to-city’ capability. The majority of the Keolis order comprises 206 of BYD’s best-selling 12-metre model all of which will be equipped with pantographs.

In 2016, the Dutch minister of Traffic and Infrastructure signed a covenant which aims to reduce emission, such as CO2, Nox and PMs by 2025. Keolis has surpassed this target by operating almost emission free straight from the start of the concession. 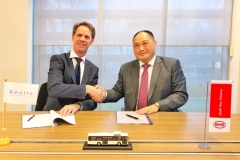 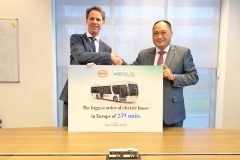