After launching its electric bus and coach manufacturing business in France in the last autumn, now BYD France reach the cities of Dunkirk and Orléans.

The new plant in Allonne near Beauvais in the Hauts-de-France region, has already assembled three models of 100% electric buses for the cities of Beauvais, Dunkirk and Orléans. In a very short time, the company has proven its ability to quickly produce zero emission buses for cities of different sizes.

It was its home city that placed the very first French order for the Agglo du Beauvaisis, delivered in early December. An official ceremony was held to present the two 12-metre buses to the Beauvais residents. The new vehicles, which serve the regular route from the Beauvais-Tillé airport to the City Hall and train station, as well as on an express liaison shuttle bus route to the hotels, were well-received by the locals.

The city of Dunkirk placed an order for three 8.7-metre Midibus, all delivered before Christmas to the DK’ Bus network managed by Transdev. The buses will be running in January on route 16, which is completely free to use and serves key locations in the city centre such as the train station, the university and the town hall. The buses will operate all day long with a single electrical charge enabling them to complete their 200 km daily itinerary and then be recharged at the depot during the night.

Lastly, Keolis Orléans Val de Loire ordered an 18-metre articulated bus to run on the routes of the Tao network of Orléans Métropole. This bus is expected to enter service in January too alongside other conventionally-powered vehicles.

We are very proud of this first quarter of progress in France. BYD has demonstrated its ability to offer bus models that meet the needs of cities despite a variety of different operational demands. Many other cities have already placed orders for the coming year and we are confident that this is the beginning of a fruitful collaboration between BYD and French bus operators to make transport cleaner. 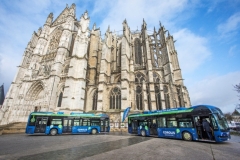 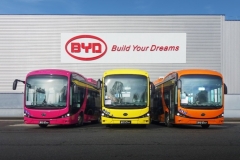 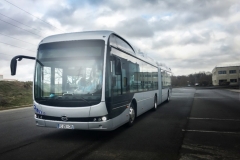