BYD has been delivered three 12m e-buses to the Municipality of Novara. The new e-buses can be used during a full day operations without necessity to charge their batteries.

The new electric buses were presented last December 15th to the Mayor of Novara, Alessandro Canelli, and the Director of the operator SUN, Marzio Liuni, by Isbrand Ho, Managing Director of BYD Europe.

The purchase process began in 2014 when the Piedmont Region decided to allocate resources from the Ministry of the Environment for air quality improvement through the purchase of electrically powered buses.

SUN and GTT of Turin joined this program by allocating the necessary funds for the co-participation in the purchase of the vehicles – 20 units destined for GTT of Turin and 3 units for SUN of Novara.

Actually both cities from Piedmont, West-Northern Italy, have 23 e-bus in service, the largest fleet in Italy.

Thanks to the vision of Piedmont Region, and of foresight of those who wanted to believe before others in the future of the full sizepure electric bus, the citizens of Novara can begin to breathe cleaner air –a process which will hopefully accelerate as the city switches on new electric buses and switches off the old polluting diesel model – adding: BYD is building its foundation in Europe with Europe’s largest fleet of electric buses having completed one million kilometres of zero pollution operation in London, the largest fleet of electric buses at a major international airport now over two years old at Schiphol Amsterdam and operators from the north of Sweden to Israel amongst our trusted customers.

The BYD e-buses can carry 83passengers, of whom 22 are seated, with space for a wheelchair.

Because the buses do not have internal combustion petrol engines they are very quiet and below the noise threshold typical of urban environments. For this reason they are equipped with a horn to signal the presence of the vehicle to pedestrians and cyclists.

The bus livery was created by the students of the School of Painting of the Albertina Academy of Fine Arts in Turin, which, coordinated by the teacher Giuseppe Leonardi, have worked in synergy with the Region creating a graphic design which reflects the spirit of the initiative. 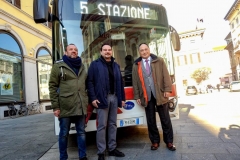 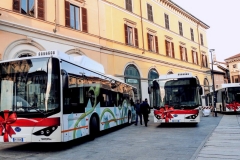 BYD Europe celebrates the 20th anniversary in Europe in a ceremony that was held in Schiedam, the Netherlands. The city is a part of the greater Rotterdam region, in South-Holland where BYD’s European Headquarters has […]

Zero emission propulsion for buses and coaches from Saietta