The Hungarian Magnus Aircraft Ltd. created the world’s first all-electric airplane and, after reaching China, started to expand its market to the US, reports mno.hu. The company was established in Kecskemét in 2011 and gained fame for their Magnus Fusion aircraft, by which Zoltán Földi, pilot and Kálmán Hankusz, press photographer travelled around the Mediterranean Sea in the honour of Antal Bánhidy, pilot and mechanical engineer.

The International Civil Aviation Organization (ICAO) issued that all commercial pilots have to attend emergency trainings and also take exams on a yearly basis, from January 2017. 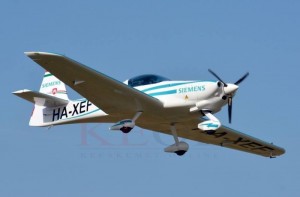 Hence, Magnus Aircraft started to develop an airplane which would be completely environmental-friendly and relatively cheap, thanks to its electric drive.

Domonkos Andréka, Communication Director of Magnus Aircraft told the site that the eFusion completely models commercial planes, as the seats are placed next to each other, oppositely to the planes being currently used for such training purposes and have their seats behind each other. Also, in the eFusion the instructor can help the students during the training, which is not an option in the other planes.

Besides, the plane may play an important part in the basic training of pilots as well.

The developing process was carried on by the teams of Siemens and Magnus Aircraft: the former was responsible for creating the electric drive, the engine, and the complete electric monitoring system, while the latter was in charge of figuring out how to put all those things into the plane, and then, let it fly. according to mno, it cost 1.4 million EUR.

The company’s goal is to enable the eFusion to fly for about 1-1.5 hours. Currently it can fly for about 35 minutes. They still need to make some of the internal devices and equipment lighter in order to keep to the weight limitations. Moreover, the eFusion has to complete a test series of 40 hours to get permission for aviation all over the country. The plane has spent already 20 hours in the air, but the 40 hours have great significance, because then the problems can be realized and fixed, after which the eFusion can become totally fool proof.

At the moment, the interest in the plane is rather huge, but before it can be put to the market the eFusion has to pass all the tests and fulfill the compulsory flying hours.

Still, it is great to note that the feedback are already promising and Magnus Aircraft has been mainly contacted by foreigners, though, companies from Hungary have also expressed interest in the product. Also, leaders of the firm already started negotiations in Fredericksburg, TX.

According to Andréka, due to their effective demand and the history of aviation the American continent is regarded the most mature market and currently they issue most of the private pilot licenses.

Which is why Magnus Aircraft finds it beneficial to enter the market there, and to construct the place of plane assembly and maintenance manufacture there.

Earlier, they also agreed with China on constructing such a manufacture there. Besides, they are planning to establish the Magnus Pilot Academy, which would happen in the second half of 2017, in China, and from March 2017 in the US. Further goals include the beginning of the series production and the development of other planes.

Volocopter has raised €200 million for the final sprint towards certification and commercial launch in the next two years. […]