After the first public flight of a Volocopter air taxi in a European city took place in Stuttgart last September, a lot of people had experience about air taxi flying at close range.

The flight at the Mercedes-Benz Museum in Stuttgart was part of a research project to investigate the acceptance of air taxis in the society.

At the „Vision Smart City“ initiative, the Hochschule für Technik Stuttgart – a University of Applied Sciences – asked a total of 1.203 participants about their personal attitudes towards air taxis. In contrast to previous studies in which the participants had to imagine air taxi technology, the respondents were able to experience an 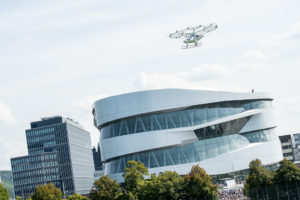 actual air taxi flight. Thus, for the first time, a realistic evaluation of the public opinion on air taxis could be retrieved. A part of the sample was additionally questioned before and after the flight in order to better understand the effect of experiencing a live demo flight.

The most important study results are:

In addition to the Hochschule für Technik Stuttgart – a University of Applied Sciences – the Lab1886 of Mercedes-Benz AG, the Volocopter GmbH, the State Ministry of Baden-Württemberg and the City of Stuttgart were involved in the project, which was supported by the BMVI‘s mFUND research initiative and were all represented at the „Vision Smart City“ initiative on the 14th and 15th September.

The first urban flight of Volocopter in Europe in Stuttgart

During the presentation of technical innovations and sustainable transport concepts for future mobility at the Mercedes-Benz Museum in Stuttgart, Volocopter flight for the first time in Europe. The Minister-President of the state of Baden-Württemberg, Winfried […]