In the early years ‘90s, Volkswagen participates in different projects to develop eletric vehicles and in Rügen island created the Rad-era Volkswagen van.

In the early 1990s, the German government asked automakers to push the boundaries of what was possible with current day ev technology. To create a real-world environment for testing EVs, Germany set up a long-term test on Rügen, the country’s largest island and a resort destination in the Baltic Sea. The island provided daily driving demands that were well suited to the limited ev ranges of the time, and as much of its electricity came from wind power, the vehicles had a low carbon footprint. 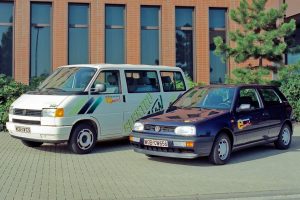 Various German automakers contributed 60 custom-built ev models to the experiment between 1992 and 1996, with 19 cars and vans from Volkswagen.

Volkswagen made nine Golf III CitySTROMer models available – an evolution of prior ev prototypes that had several innovations, including an alternating-current synchronous motor, flexible battery location and the ability to use a variety of battery chemistries, from lead-acid gel to sodium-nickel chloride.

Ten Volkswagen Elektro-Multivans used similar technology, updating the work Volkswagen had done since the early 1970s exploring electric cargo haulers. Due to low energy density, the CitySTROMer only made about 21 hp, with a range of roughly 55 miles – which, while limited, was enough to handle daily driving around Rügen.

Over three years, residents of Rügen put tens of thousands of miles on the CitySTROMer and electric van, but the experiment demonstrated the need for longer-range batteries, more engine power and a charging infrastructure. All of those challenges will have far more advanced answers when the production version of the ID.Buzz electric van debuts in the not-too-distant future.