The new FIA RX2e car got another admirer in Timmy Hansen after Höljes exhibition where the 2019 FIA World Rallycross Champion has been impressed by electric potential.

The Swedesh Champion was one of several top-class off-road talents to get behind the wheel of the electric vehicle, that saw Hansen team up with Johan Kristoffersson and Sebastian Eriksson to race one of three RX2e cars against a host of all-star rivals at the iconic Värmland track.

And it was Hansen and his squad who emerged victorious after six frenetic heats, getting the better of Andreas Bakkerud, Kevin Eriksson and Anton Marklund in one car and Kevin Hansen, Oliver Eriksson and two-time World Rally Champion Marcus Grönholm in the other. 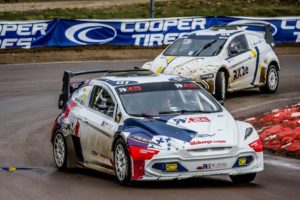 Speaking about the RX2e car, which generates 250kW (335bhp) of power and up to 510Nm torque, Timmy Hansen said:

I’ve had a great time in the RX2e car. It suits rallycross really well, and the way it handles on the exit of corners is absolutely incredible. You can work differently with the front and rear engines separated and it gives incredible traction.

Although I have done a little bit of driving in electric cars, there are a lot of new things for me to take in. Driving around Höljes without pulling gears is strange! I was searching in the air with my hand for where the gear lever was meant to be.

It was a good run and I was very impressed with the car. I don’t know the lap times but from the way it felt, it was definitely faster than the old RX2 car.

Electric is the future of motorsport, and the technology that is available with electric cars has so much more potential than what we can get with conventional engines.

I’m all for driving fast cars in whatever way, and this is new technology with so much promise in it. There is so much power and acceleration, while there is instant torque.

I am very excited, and it was a big day for me – my first race in electric rallycross!

Meanwhile, Kevin Hansen was also in awe of the performance supplied by the RX2e car and was quick to defend the technology against potential critics. 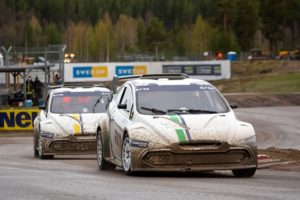 It is amazing to race these cars. Oliver [Eriksson] had a massive moment heading into turn one and the joker, but he held on to it brilliantly. He’s been the test driver of this car and I think he’s done an amazing job.

The RX2e car is really nice. For sure, it is a challenge and you can do a lot of different things with the set-up even though it is the same car.

This is the future, and I feel really happy that it is finally here and we can try it out. The action in these races has been brilliant so for everyone saying that electric racing will be boring… they are so wrong.

I have been spotting for Oliver in Swedish, which is a bit different, but we have been friends for so long – since we were small kids running around Höljes – so to do a race together like this is really nice. It’s makes our friendship even closer.

For us, it’s a fun weekend. We’re always competing against each other but it’s nice to relax a bit while also showing the future of rallycross. 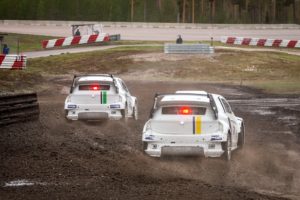 It has been fantastic to see the leading names in rallycross embracing electric technology with such enthusiasm. The Superteam Challenge proved a hugely popular event and showcased the potential of the RX2e car in a racing environment.

The world class line-up of drivers did not hold back on track, and we have already received a wealth of useful feedback as we look to maximise the performance of the car ahead of the 2021 season.

At the beginning of next year has been announced that FIA RX2e cars will be at the legendary Race Of Champions’ inaugural snow and ice event. […]