In the second round of the European Rallycross Championship, HöljesRX, held at the imposing Höljesbanan circuit, RX2e surprises and convinces the Paddock.

This circuit is considered as “The home of Swedish Rallycross” and the success of the race of 20-22 August, means a major victory for the world of Rallycross and e-racing in the debut of the first FIA Electric Rallycross Championship.

RX2e is the 100% electric category of European Rallycross, sanctioned by the FIA, a joint project between QEV Technologies, the Spanish engineering company specialized in electric mobility and the Swedish powerhouse of Rallycross OlsbergsMSE. It is the leading series in support of the FIA ​​World Rallycross Championship this season (2021-2022), being the first international electric step to rallycross and the pathway to the top of the sport for aspiring stars. 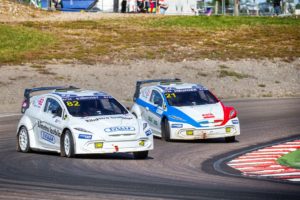 One of the key attractions of the RX2e is the emphasis on the skill of the driver behind the wheel in this single-spec series, prioritizing dexterity and ingenuity above all else. The two engines in the RX2e car generate a spectacular 250 kW (335 hp) of power and up to 510 Nm of torque. This represents a significant improvement over the Supercar Lites, the RX2e’s predecessor combustion category, reducing the gap to the World Rallycross Championship supercar class.

On July 5 2019, the FIA ​​opened the tender for the project. On October 4 of that same year, QEV Technologies was the winner together with its partner OlsbergsMSE, thus initiating the development and manufacture of the test car. In total, 4,000 km of track development have been carried out, under the responsibility of the renowned driver Oliver Eriksson.

First of all, QEV Technologies thanks the Fédération Internationale de l’Automobile (FIA) and the new promoter of the WRX, Rallycross Promoter GmbH, for the opportunity and the help provided throughout the development and formalization of the project, which is giving such good results.

Second, QEV Technologies recognizes and gratifies the great work and collaboration on the part of all the suppliers involved in the project: AP Racing, BRAID Wheels, Cascadia Motion, MAGELEC Propulsion, OMP Racing, R53 Engineering, ZN (ZeroNoise), GKE- Power Electronics and LedLights. We have produced a Rallycross car whose performance is better than its predecessor; and this is demonstrated by the results obtained in the first and second weekend of the competition: a vehicle whose undeniable performance, backed by the excellent reliability and safety it fosters, guarantees the correct operation of the competition as well as the own safety of the pilots – without leaving aside the frenetic and spectacular action offered by a competition of these characteristics. 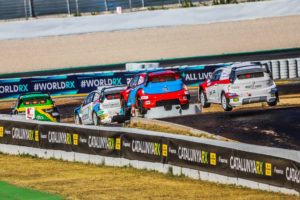 Third, QEV Technologies wants to highlight the trust placed in our company and the project itself by pilots, who have already seen their expectations about RX2e fulfilled.

Fourth, we would like to make a special mention to our partner OlsbergsMSE. The historical success of the RX2e goes through the excellent relationship and convergence between the two companies, since all the situations to which we have been exposed have been resolved and faced successfully.

We are very satisfied with each and every one of the steps that have been taken in this project. In the CatalunyaRX, RX2e has surprised and convinced the Rallycross Paddock. After HöljesRX, we reaffirmed ourselves in this position. This weekend has been spectacular. We have laid the foundations for the future of this sport.

I cannot help but thank every member involved in this project, starting with the human team of OlsbergsMSE and QEV Technologies, as well as all the institutions that have helped to push and give life to this project. All the effort, even despite the complications derived from COVID-19, have yielded the best possible fruit – he continues.

Now, the future is to grow the electric category with more competing pilots. We know that this is the way to go, we have been working on electric mobility for more than 10 years, and more and more championships will be incorporated where we can compete with these vehicles – he ends up excited.

This weekend has been the culmination of many months of work. RX2e has met the expectations of everyone: drivers, fans, the public and the world of Rallycross! We have set the first step in the direction that racing and motorsport should take: the transition to racing with renewable energy. It is indescribable to see the satisfaction and enjoyment in the public and the drivers. RX2e does not stop providing us with spectacular frenetic action on the track, and it leaves no one indifferent!

The new FIA RX2e car got another admirer in Timmy Hansen after Höljes exhibition where the 2019 FIA World Rallycross Champion has been impressed by electric potential. […]