Amsterdam, Nederland. 22nd November 2017. Cruden B.V., the world-leading designer, manufacturer and integrator of open architecture driving simulators, is building a simulator for the Mahindra Racing Formula E team. This is Cruden’s first bespoke Formula E simulator, with the ECU and controls of an actual Formula E racing car. The Cruden package comes with Panthera simulator software that allows Mahindra’s existing vehicle model, which is also used for lap time simulation, to be integrated and used as a real-time driver-in-the-loop (DIL) simulation model, as well as access to a full library of Formula E street circuits. 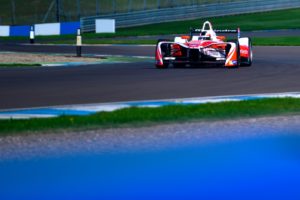 The new simulator is ideal for Formula E teams looking for ways to extract optimum performance from their electric powertrains yet who are new to using a professional-grade DIL simulator as part of their performance engineering. Mahindra Racing’s engineers will use the simulator to prepare for upcoming races, finding how to optimise energy management by testing various settings, strategies and race scenarios. Having a driver-in-the-loop is essential to the realism of these tests.

“An electric powertrain is only as good as its inputs. Good controls-software and great controls-strategies are vital to achieving the best performance from the hardware. Software development is becoming the holy grail of Formula E.”

Cruden’s new simulator will also give a critical competitive advantage to Formula E drivers. One of the unique challenges of driving a Formula E car is the complexity of the controls needed to alter the characteristics of the electric powertrain while the car is on the move. During a race, the driver has to monitor and adjust the car’s energy consumption, energy regeneration, battery temperature and optimum engine speed for gear-shifts. This is all done with the steering wheel which has an integrated dashboard display and 21 rotary controls, paddles and buttons. The steering wheel is connected to the ECU which is integrated with the simulator as hardware-in-the-loop (HIL).

Seat-time will also help drivers learn or become re-acquainted with track layouts. Cruden produces accurate reproductions of all the tracks visited by the Formula E Championship which are temporary street-based circuits in city centres, unavailable for real-world testing.

“A professional simulator is needed to ensure that our energy strategies are correct and that our drivers are familiar with all the controls procedures and options before we get to the track. After researching all options, we concluded that a Cruden simulator will provide the best balance between cost and technical benefit. It’s important that we are be able to integrate the simulator with our existing vehicle model. Cruden is a skilled system integrator with a detailed understanding of racing operations which gives us a great deal of confidence.”

“Automotive technology, on both the race track and on the road, is moving towards increasingly sophisticated electric and hybrid powertrains and Formula E is a good example of this. It’s a championship in which energy management can be the deciding factor when it comes to winning or losing a race. In this respect, Cruden’s new Formula E simulator certainly provides us with a crucial competitive advantage.” 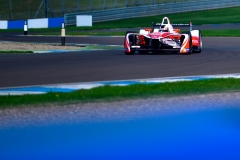