After announced the drivers line-up to the ABB Formula E Championship 2019/2020, Porsche assemble also the background to prepare its debut in Formula E in November. 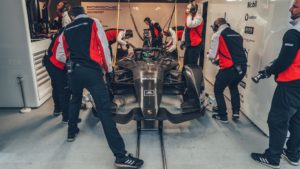 Formula E sets clear requirements with regard to the team at the racetrack.

To run two Formula E cars, 20 team members are permitted on site. This does not include top management and such departments as marketing and press.

When it comes to technology, however, there are no limits restricting the works team in Weissach. Research may be, and should be, uninhibited at this site.

As far as our drivers are concerned, we have a very good starting position for Porsche’s works entry in the ABB FIA Formula E Championship with Neel and André on board. It is very important to integrate both regular drivers in the preparations early on in proceedings so the team can collaborate fully with the two

drivers. Many new challenges await us in our first season in Formula E. The limited number of people at the racetrack is certainly one of these challenges. In recent months, many scenarios have been tried out at tests and in Weissach, which in turn has allowed the team to acquire valuable knowledge that it can apply to its operations. As a team, we are very well positioned and have outstanding

engineers and mechanics on board, the majority of whom have been involved in the previous LMP1 project. Team spirit has always been a very important factor at Porsche, without which the many successes we have enjoyed in the past would not have been possible. We are optimistic that we can make a difference in Formula E as a team.