The 2019/2020 ABB FIA Formula E Championship got back under way this week and here the Michelin statement about Michelin Pilot Sport tyres.

In contrast to the series’ previous trips to the German capital, the first two races used a clockwise version of the 2.355-kilometre, 10-turn circuit, but the 24 drivers had to cope with the same, notoriously hard-wearing surface, although the track’s width provides good overtaking opportunities. 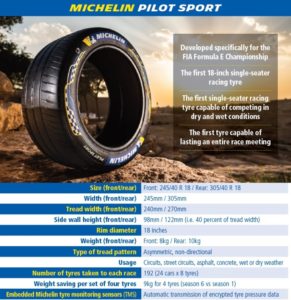 In addition to the exceptional circumstances associated with this season’s finale, the championship’s organisers and the FIA (Fédération Internationale de l’Automobile) decided to spice up the competition a little by reducing the tyre allocation per driver by 25 percent, with just three sets available instead of four for each of the three pairs of e-prix. This decision fits perfectly with the spirit that drives the all-electric series which actively promotes the protection of the environment, a value it shares with Michelin.

Although this new measure added to the challenge faced by the teams in terms of strategy, it had no negative impact on the quality of the show provided by the first two E-Prix in Berlin – notes Jérôme Mondain, the manager of Michelin’s Formula E programme. “The drivers were able to race at their own pace thanks to the wise management of their quotas by their respective teams who switched between new and part-worn tyres. Many of them, but not all, chose to keep the tyres they used in qualifying for the race. We know this venue quite well because the championship has been here several times since the very first season, so we were confident the current Michelin Pilot Sport – which raced here in 2019 – would be up to the job. In fact, wear turned out not to be an issue and most of the drivers posted their fastest race laps towards the end of the races to provide yet another illustration of our tyres’ exceptional versality.

The current-generation Michelin Pilot Sport Formula E tyre is effectively capable of delivering top performance whatever the weather conditions, not to mention its fast warm-up characteristics, resistance to wear, high grip and consistency, while its low rolling resistance contributes to the range of the championship’s all-electric single-seater cars. On top of that, the track and air temperatures in Berlin reached close to 40°C and 30°C respectively.

The timetable for the second pair of races (on Saturday, August 8, and Sunday, August 9) will be identical to the first, with free practice in the morning, followed by qualifying in the afternoon and the e-prix themselves starting at 7:03pm local time. The circuit will be the same, too, although this time it will be run anticlockwise.